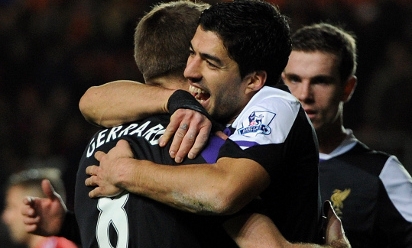 Despair for Borini despite Wembley goal

Steven Gerrard reflected on yet another Luis Suarez masterclass against Southampton on Saturday and declared: 'He's an absolute genius.'

On his 100th league appearance for the club, the No.7 ended a five-match run without a goal by hitting the opener at St Mary's to take his overall tally to 24 for the season so far.

Suarez then turned provider after the break to tee up Raheem Sterling for the Reds' crucial second before he won the late penalty that allowed Gerrard to fire home from 12 yards and secure an emphatic 3-0 win.

"It was a huge win for us and Luis showed once again that he's an absolute genius," Gerrard told the Liverpool Echo.

"People had been talking about him going five games without a goal but his contribution to the team has never wavered.

"He is very unselfish. At times he's been asked to play in a wider role and he has shown what a great team player he is.

"Even when he wasn't scoring, he was still terrorising defenders and creating goals for us.

"It was a great way for him to celebrate 100 league games for the club. His record is phenomenal.

"All strikers go through spells where they don't score but he's back on the scoresheet now and hopefully there's plenty more to come from him.

"After the quality of the finish for the first goal, it was a great assist for Raheem and then the way he earned the penalty just underlined the problems he caused them all game."

After taking a 16th minute lead through Suarez, Liverpool were force to stand firm as Southampton attempted to muster an equaliser before the break.

"Southampton had their moments in the first half," said the captain. "You are always going to have to withstand spells like that away from home and we dealt with it really well.

"The sign of a good side is the ability to absorb pressure and then cause the opposition problems on the counter-attack. I thought we did that really well.

"There were two big moments in the first half. The save from Simon Mignolet to deny [Jay] Rodriguez was world class.

"We also had a bit of luck when [Adam] Lallana's shot hit the post but you need little things like that to go your way.

"The manager got his tactics spot on and the team carried out his orders superbly.

"We played with a diamond in midfield to ensure we had bodies in the middle of the park to stop their threat.

"Then when we got possession we could counter-attack with the pace and quality of Daniel Sturridge and Suarez."

The result moved Liverpool up to second in the Barclays Premier League table.

However, Gerrard insists that while it's great for fans to dream about what could be achieved this season, a sense of calm continues to prevail within the dressing room.

Gerrard said: "It was nice to hear the fans singing about us being in the title race.

"But for us as players it's just a case of staying calm and relaxed. We can't get carried away.

"We are in the race, we have no other distractions and we believe we can compete for it, but there is still a long way to go. We've got some really important and difficult games coming up and we need to be focused.

"Everyone outside of the camp probably thought we would drop points at Southampton. Before the game, they will have looked at our fixtures and thought we would slip up in this one because it's such a tough one.

"Southampton have taken points off some big teams at St Mary's this season and our recent record against them wasn't great.

"But there's a great togetherness in this team. The spirit in the dressing room is something the manager has created.

"There is a lot of belief in the team. Games like the win at Southampton, coupled with what we've done at home recently to the likes of Everton and Arsenal, have fuelled that belief.

"There are other big teams fighting for the title and I wouldn't say we are the favourites. In fact we are the underdogs.

"But confidence is high and with 10 games to go we're in a great position. We have given ourselves a chance."