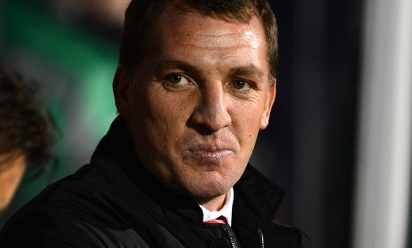 On demand: Analysis of Fulham win

Brendan Rodgers credited a strength of character his side once lacked for the turnaround Liverpool produced in overcoming a resilient Fulham side with a last-minute 3-2 victory on Wednesday evening.

The Reds trailed twice at Craven Cottage, with an own goal by Kolo Toure initially setting the away side back; Kieran Richardson then restored the hosts' advantage after Daniel Sturridge had fired his obligatory effort before half-time.

But Philippe Coutinho found the bottom corner with a precise drive from the edge of the box midway through the second period, paving the way for the indomitable captain, Steven Gerrard, to coolly convert a penalty with the clock showing 90 minutes.

Afterwards, the Northern Irishman pointed to the unceasing desire within his squad to achieve their objectives and highlighted the sense of togetherness which is growing exponentially around the club.

The boss reflected at his post-match press conference: "It was a really important win for us tonight after the game at the weekend, where we were outstanding.

"We had to show some different qualities tonight; one of them being character. It was a wonderful demonstration of the real togetherness of the group. It was very, very pleasing.

"Fulham didn't have too many chances. We gave them an own goal and then they scored from a poor piece of defending from us. Other than that, they had one other opportunity in the first half.

"Before they went 2-1 up, we hit the post. We looked like the team that was probing and passing. I've got great respect for Rene Meulensteen. He's a good guy, who has come into a very difficult job. The team did him very proud today, like they did at Old Trafford.

"But I can only give huge credit to the players tonight, because we had to dig deep to get that performance and result. It shows there's a lot of character and there's still a way to go for this team.

"My concentration, since I've been here, has always been on the next game and then getting out on the training field and improving aspects of the team.

"Tonight you saw the real development of the team in terms of character yet again. You saw young players in pressure situations stay calm and stay focused.

"We introduced another young player in Joao Teixeira, who has done great in our reserve team. Not only did he show that he could come in and play with some of our top players, he's also shown he can fight for the team. He made a great block at the end and it was equally important for us.

"Daniel Agger had been out for a while. I said to him that, if the penalty went in, he was going straight on, so to get ready. I had an idea that with the big guy coming up front, it would become a war for the last five minutes.

"As soon as it went in, Daniel was coming on and he made three great headers in the end to prevent us from conceding."

The living embodiment of the attitude Rodgers describes was the skipper, Gerrard, who created the Reds' first goal with a sublime through ball with the outside of his foot, then took the responsibility of hitting the target from 12 yards.

It was the latest in a long line of moments in which the 33-year-old has dragged his club to the required result, and the manager spoke glowingly about the midfielder when the dust had settled on the drama. 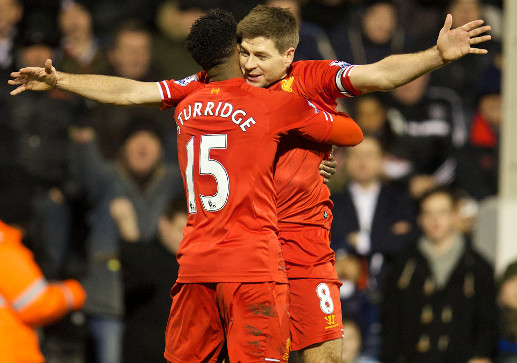 On the assist, Rodgers commented: "It was at a critical moment in the game because we needed that just before half-time.

"The goal gives us that balance in the game, and for the five or six minutes after we got it, we went onto another level in terms of the speed in our game. That set us up for the second half, but we gave away a poor goal again.

"We'd lacked intensity in the first half, we lacked aggression and we didn't control the longer ball - and that was my point at half-time.

"Steven, for me, is peerless in many aspects. He was brilliant against Arsenal. His pass for the first goal, that penetration he has, which he's shown all his life, and then he's composed at the end. His professionalism right through into this part of his career is still there.

"He has an idea of the way which the 'keeper will dive and then he'll chose a corner. So there's no greater person than Steven Gerrard. A penalty late in the game, last couple of minutes to get the three points and he's tucked it away really well.

"But the response of the players is really what my focus is tonight. I'm certainly sure in the first four or five months after I came in here, we'd have lost that game.

"But we've now built a way of working and playing - and not only that, we've built a spirit and a camaraderie that sees us fight until the very end. That's what got us the result.

"You're always pushing and you're always looking to get something. For me, it's never over until the whistle goes. They were disappointing goals to concede.

"We've defended poorly at times this season. It's not been a structural thing; it's been down to individual errors that have cost us. But thankfully we're a very aggressive team offensively. So we've got goals in the team. That's something that I've been trying to build since I've been here.

"I arrived into the club and the team didn't score enough. Now we know we can go to any ground or play at home and get goals. And tonight our goals got us the three points, rather than our defending."

Two games in the Barclays Premier League had to be called off on Wednesday evening as harsh weather, dangerous winds in particular, have caused havoc across the country.

Rodgers was therefore keen to pay another special tribute to the travelling Kopites who braved the challenging conditions to offer a roaring backdrop of noise and support for the players throughout the encounter.

He said: "They're a real special group of people, the Liverpool supporters. They travel from all over the world to be here.

"I was saddened yesterday when I heard the game might have been off because we have people come from all over the world to support this great club.

"I hope that everyone who is at the football all across the country gets home safely because the weather has been awful. Hopefully everyone can get home."