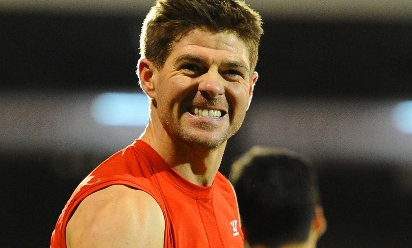 Steven Gerrard struck the winner as Liverpool fought back from a double deficit at Craven Cottage on Wednesday night to claim a sensational 3-2 victory from their challenging Barclays Premier League encounter with Fulham.

The deadlock was broken in unexpected fashion on the evening as Kolo Toure unfortunately diverted a cross beyond his own goalkeeper, although Daniel Sturridge registered for the seventh consecutive league match for 1-1.

Kieran Richardson re-established the Londoners' lead in the second half by capitalising on another defensive error, but the Reds hauled themselves level once more courtesy of Philippe Coutinho's accurate conversion from distance.

But the stage was set for the skipper in the closing seconds, stepping up to dramatically convert from 12 yards after Sturridge had rightly been awarded a penalty for a late challenge by Sascha Riether.

One hour before kick-off, it was confirmed that Brendan Rodgers had selected an unchanged starting line-up for the fourth consecutive fixture; fit-again Daniel Agger was named among the substitutes, while Academy talent Joao Carlos Teixeira was included for the first time.

In contrast to recent matches, it was Liverpool forced to defend during the earliest exchanges and goalkeeper Simon Mignolet was required to sprawl to his left and palm away a fierce drive by Ryan Tunnicliffe after a minute of play.

The travellers quickly settled into a passing rhythm, but fell behind in disappointing circumstances on seven minutes; Richardson raced behind the Reds' defence via the left channel and when his cross arrived in the area, Toure sliced the loose ball into his own net.

Luis Suarez attempted to spark an immediate response when he drifted into a modicum of space in the Fulham penalty box and unleashed a swerving effort which took a deflection and very nearly caught Maarten Stekelenburg off guard - the Dutchman reacted to punch wide, though.

Shortly after the quarter-hour, the No.7's exquisite close control brought shooting space from an ultimately futile narrow angle, while Sturridge twirled around a marker 20 yards from goal and dispatched a low hit that was comfortable for the home 'keeper.

With 10 minutes remaining in the period, a lengthy dribble along the left flank by Richardson resulted in another dangerous centre which striker Darren Bent headed over the crossbar as Kopites feared the hosts' advantage could be doubled.

Lewis Holtby's trickery was a regular source of creativity for the Cottagers and the attacker scuffed a shot off-target from distance, before Sturridge glanced wide to the left after connecting with a high, looping delivery by Raheem Sterling.

But the No.15, who claimed a hat-trick on the same ground last season, made no mistake four minutes before the interval. Gerrard's delicious, outside-of-the-boot through ball played the Englishman in perfectly to plant a finish off the post and in to equalise.

With momentum on their side, Rodgers' team started the second half brightly and, five minutes in, Suarez guided a troublesome free-kick towards the far corner from the left hand side - Stekelenburg scurried across goal, but watched the strike carry wide of the post.

Steve Sidwell briefly worried Mignolet with an outrageous blast from his own half, but the Belgian stopper collected. At the other end, the Reds' No.7 volleyed wide with his left foot having been picked out by Sturridge's lofted pass from the opposite flank.

The 24-year-old took matters into his own hands by drifting from the right wing and clipping goalwards, but a deflection brought just a corner; then Suarez fired from the left edge of the area and watched his punt bounce away off the base of the post.

For all of the pressure mounted by Rodgers' charges, it was Fulham who found a crucial second strike. Richardson pounced on loose possession inside the six-yard box, after Martin Skrtel could not fully clear, and calmly tapped into an open net to restore the Cottagers' lead on 63 minutes.

Liverpool are not known for giving up, however, and within 10 minutes the away side restored parity for a second time on the night. Coutinho danced into freedom from the right hand side and struck a low curler which eluded Stekelenburg and nestled beautifully into the corner.

With eight minutes remaining, Rodgers introduced Teixeira for a senior Liverpool debut; as the Reds pressed and pushed for the winner, Coutinho then whistled a long-ranger narrowly the wrong side of the target.

But the decider did arrive. Sturridge paced into the Fulham box one last time and was felled by Riether; when the referee pointed to the spot, up stepped the skipper to place a sublime finish into the side-netting and secure a remarkable three points.