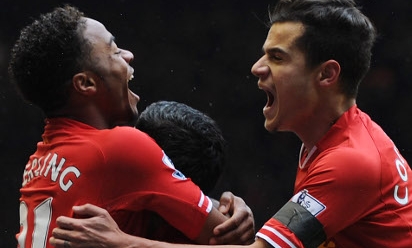 Liverpool produced their greatest display of the campaign to pulverise Barclays Premier League leaders Arsenal 5-1 with a ferocious attacking performance at Anfield on Saturday.

Brendan Rodgers' dream vision for his team - a combination of pace, power, pressing and unerring finishing - became reality to reduce the gap to the summit and extend the Reds' advantage in the battle for Champions League qualification.

Martin Skrtel burst open the floodgates with a double inside 10 minutes, Raheem Sterling slotted home for a third and Daniel Sturridge completed an outrageous session of play to hand the hosts a 4-0 half-time lead.

Sterling increased that advantage even further with his second of the afternoon at the outset of the second half, with Mikel Arteta providing a consolation for the Gunners midway through the period from the penalty spot.

When teams were announced before kick-off, Rodgers named an unchanged line-up for the third consecutive fixture - with exactly the same starting XI and substitutes as against Everton and West Bromwich Albion.

Liverpool wasted no time whatsoever in setting about their task for the day and registered on the scoresheet with a minute played; Luis Suarez won a free-kick on the left channel, Steven Gerrard provided a sublime delivery and Skrtel prodded in from close range.

In scenes reminiscent of the recent Merseyside derby, the Reds' tempo was scarcely believable, and Wojciech Szczesny was forced into a reaction save low to his left when Sturridge skipped inside and unleashed a rocket to the near post.

The Slovakian goalscorer was needed at the other end on seven minutes, mopping up following an unfortunate incident which saw Simon Mignolet's parry away from danger bounce off the onrushing Nacho Monreal and on a path to the net.

Back came the hosts, with Szczesny taking his turn to keep an opponent at bay by thwarting Jon Flanagan - but from the subsequent corner, Gerrard planted a set-piece onto Skrtel's head and the centre-half looped perfectly home.

Rodgers has described his team as 'relentless' on several occasions this season and they truly were here; Sturridge narrowly dinked wide from a Suarez assist and the No.7 then crashed a sensational volley from 25 yards onto the post.

Neither the woodwork nor Arsenal could do anything to prevent Sterling from providing a third for a buoyant Liverpool, however, with the winger tapping home easily at the back post from Suarez's accurate drive across the area to conclude a rapid counter-attack.

Were the Reds content? Not a chance - Philippe Coutinho dissected the Gunners' backline with a trademark through ball, Sturridge took control and, in the blink of an eye, the ball was nestling beyond Szczesny for a fourth time.

Finally, the match settled and the home side swapped goals for possession during what remained of the opening period, although Suarez delivered a further warning shot in the closing seconds with a whistling left-footer from distance that carried wide.

While the fledgling moments of the second half could not quite match those of the first, the supporters in L4 only had to wait a mere seven minutes to celebrate yet another strike - this time in front of the Kop.

Sterling zipped in behind the Arsenal defence along the left channel and, afforded the freedom of the penalty area, converted underneath Szczesny after his initial hit had been blocked by the Polish 'keeper for his second effort of the match.

Forced to find a response, the visitors worked Mignolet when Alex Oxlade-Chamberlain moved forward centrally and blasted a daisy-cutter; Arsene Wenger then made a triple substitution, with Kieran Gibbs, Lukas Podolski and Tomas Rosicky entering the action.

The Reds' Belgian stopper handled a dipping curler from Jack Wilshere shortly after the hour mark, prompting Suarez - keen to join the goalscorers - to hurl a free-kick towards the top corner from the right which Szczesny just about clawed away.

Jordan Henderson perhaps should have had a sixth having been released courtesy of another Coutinho masterclass, before Arsenal struck back with around 20 minutes remaining on the clock.

Gerrard was penalised for a challenge on Oxlade-Chamberlain as the Gunners attacker darted for goal, allowing Arteta to step up and gently clip the spot-kick past Mignolet, marginally reducing the arrears.

The Liverpool No.22 refused to be beaten moments later, though, scrambling to his left to palm away a powerful set-piece by the former Everton midfielder; his opposite number then handled smartly from a Coutinho drive.

Sterling was denied a hat-trick by the leg of Szczesny and substitute Jordon Ibe whipped an effort over, but enough damage had been achieved long previously and the referee prompted Red celebrations by blowing the final whistle.