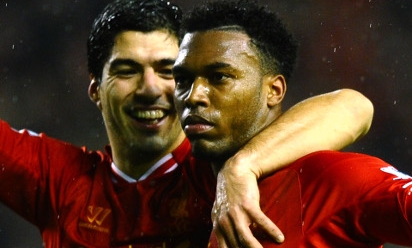 Raheem and Flanagan return for the derby

Liverpool simply dismantled neighbours Everton 4-0 on Tuesday evening in a Merseyside derby that will rightfully take its place in the Reds' history books. 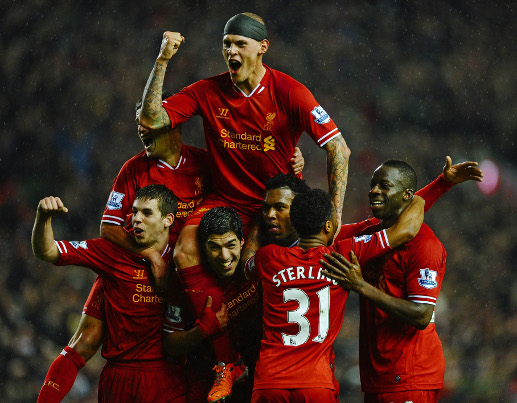 Fittingly, Steven Gerrard was the man to open the floodgates, paving the way for Daniel Sturridge to register twice in the first half and then Luis Suarez to seal the triumph with yet another remarkable individual goal.

The result - Brendan Rodgers' first win over the Blues - not only consolidated the hosts' current position in the Barclays Premier League top four but opened a four-point gap to their opponents.

The first warning shot was fired by the visitors with barely 60 seconds on the clock; Ross Barkley collected possession 45 yards from goal, strode forward and unleashed a left-footer which skimmed over the crossbar at the Kop end.

Within seconds, Tim Howard's palms were stung by a rasping Jordan Henderson volley, before outstanding pressing by Sterling presented Suarez with the chance to crash a low shot which the opposing goalkeeper dived to his left to claw away.

It's a common cliché to describe derbies as frenetic, but the 15 minutes truly were with the game played at a phenomenal pace, and Howard had to be alert again to deny Sterling after the winger connected with a Sturridge delivery and toe-poked goalwards.

An intricate exchange involving Henderson and Suarez ended with the latter dispatching a strike which was deflected for a corner on 21 minutes; the Uruguayan took the set-piece himself and planted it onto the head of the skipper, who powered home and set off on a ferocious celebration.

With Romelu Lukaku forced off injured, Liverpool sensed an opportunity and Sturridge whistled a curler inches over the woodwork from the left edge of the Everton penalty area after being teed up by Suarez.

Roberto Martinez's side responded and Mignolet was at full stretch to his right to place two strong hands on a drilled attempt by Blues defender Phil Jagielka as the tempo of the encounter merely increased on the half-hour.

Kevin Mirallas then struck a daisy-cutter from 20 yards which eluded the reach of Mignolet but, fortunately, travelled wide of the corner that the Belgian was aiming for. What happened next was incredible.

Firstly, Philippe Coutinho conjured a majestic through ball which dissected the Everton backline and gifted Sturridge the chance to take a touch and coolly lift a finish over Howard to extend the advantage to two.

Less than 120 seconds later, it was 3-0 and Sturridge had a second. Kolo Toure lofted a hopeful ball forward from the Liverpool half, but it was sufficient for the No.15 to raid in behind and lob a fabulous effort high into the Anfield air and perfectly back down into the far corner.

Everton kicked off the second period determined to gain a foothold on proceedings, and Mignolet was forced into an instant reaction to punch away a blistering drive by half-time substitute Leon Osman.

The effort precipitated another dramatic session of play. Suarez added a fourth for the home side five minutes into the half when he dribbled the entire length of the Blues' half and slotted an accurate finish into the corner from an angle.

Four minutes later, Howard rushed out to prevent the onrushing Sterling and could only clatter the No.31; handed penalty duties by the captain, however, Sturridge missed the chance for a hat-trick by smashing the spot-kick into the Kop end.

There was no let-up by Liverpool, though, and Coutinho almost deceived the Everton goalkeeper with a shot to the near post from a short Gerrard corner, before in riposte James McCarthy called on Mignolet to spring low and block his clipped hit.

But the night undoubtedly belonged to the Reds and, upon the final whistle, Kopites drifted home to reflect on what will deservedly be remembered as 'one of those nights at Anfield' for years to come.