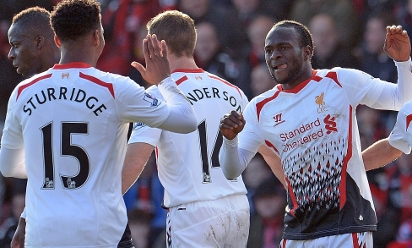 Liverpool advanced to the last 16 of the FA Cup after battling past Championship outfit AFC Bournemouth to clinch a 2-0 victory at the Goldsands Stadium on Saturday afternoon.

Brendan Rodgers' side prospered from two ruthless finishes in each half in the day's early kick-off on the south coast.

Victor Moses rifled the opener from the edge of the penalty area in the 26th minute before Daniel Sturridge slotted on the hour mark to seal the win.

Rodgers made three changes to the side that faced Aston Villa last Saturday as Brad Jones, Martin Kelly and Moses earned starting places, with Luis Suarez and Sturridge charged with leading the attack.

Liverpool had visited this stadium twice before, back when it was known as Dean Court, and on both occasions, in 1927 and 1968, the Reds were held to a draw, with Anfield staging replays. However, there would be no such repeat third time around.

The Reds eased past the home side eventually - but Bournemouth were impressive on the day and they caused plenty of problems throughout the 90 minutes, especially early on.

Goldsands was rocking and the energy from the stands translated onto the pitch as the Cherries staged a free-flowing move which culminated in Andrew Surman powering a header over the crossbar after four minutes.

Kelly was required to intervene when Harry Arter's pass fizzed across the penalty area, Simon Francis' dipping free-kick forced Jones to palm over and the home side seemed quicker and more purposeful.

Lewis Grabban, their powerful No.9, was determined to win what fast became a running battle with Kolo Toure; the pair wrestling for every loose ball launched in behind the Reds' defence.

Somewhere around the 18-minute mark, however, Liverpool started to settle into the game. Steven Gerrard began to exert influence in the deep-lying position, Moses weaved down the left wing with menace and Suarez appeared in pockets of space.

Gerrard's vicious free-kick in the 25th minute was a warning of things to come - and white shirts were streaming forward again within a matter of seconds. Suarez switched the play effortlessly to Moses, who steadied himself before firing low into the corner of Lee Camp's net for 1-0.

Bournemouth fought back. Toure was forced to make a crucial block at the feet of Surman and from the resulting corner, childhood Kopite and Cherries captain, Tommy Elphick, towered on the penalty spot to nod over the bar.

From there the game ebbed and flowed up until the interval. At one end, Suarez seized upon confusion in the penalty area, darted through a thicket of Bournemouth bodies and laid the ball off for Jordan Henderson, who fired high over the crossbar.

At the other end, Martin Skrtel ensured Liverpool maintained their lead at half-time by hurling himself in front of Arter's goal-bound strike.

Bournemouth began the second half in a similar vein to the first; each player keen to get on the ball or surge forward to open up space - and their momentum pegged Liverpool back.

Gerrard was even forced to play at centre-half for five minutes after Skrtel collided with Surman and was taken off for treatment.

However, the Reds' lead was doubled on the hour mark when Gerrard chipped to Philippe Coutinho; he found Suarez and the Uruguayan released Sturridge, who slotted calmly for 2-0.

The England international had the away end roaring their approval when he let a high ball drop and looped towards goal on the volley, where Camp was fortunate to scramble his effort over the bar.

It might have been three in the 76th minute when Sturridge floated a weighted pass over the top into Suarez, but the Barclays Premier League's leading scorer put too much on his attempted lob and the ball flew over the bar.