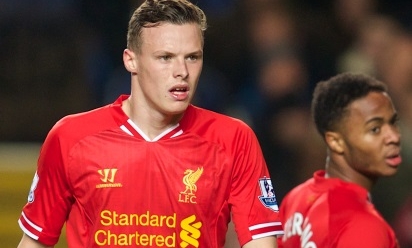 When Brendan Rodgers called for Academy talent Brad Smith to enter the action during a hectic Barclays Premier League encounter at Chelsea in December, the 19-year-old felt transposed.

More used to testing his skills against the division's best by playing a videogame at home, the Australian-born full-back suddenly found himself competing with multi-million pound stars.

In slightly over half an hour on the Stamford Bridge pitch, Smith could not prevent Liverpool from suffering a 2-1 defeat - but the 30 minutes had given the No.44 a sense of the standards required.

"I was shocked when the gaffer told me that I was coming on; I was so excited and nervous at the same time," he told Liverpoolfc.com.

"When I got on, it was so loud and the pace of the game was unbelievably fast. I was honoured to make my debut.

"The manager said: 'You're coming on, I'm going to put you on the left wing. I want you to stay wide and use your pace to get down the wing, and hopefully impact on the game.'

"Each team you play for, there are more fans and it's more public. The pace of the game is a lot different at all levels.

"I go home and play with these players on FIFA, then I'm standing next to them on the pitch - it's crazy. All of the players congratulated me on my debut."

Smith was initially named in a first-team squad by Rodgers when the Reds travelled to Manchester City on Boxing Day; he was then joined by fellow youngster Jordan Rossiter for the trip to Chelsea.

The pair - among a number of other Academy representatives - have regularly trained with the seniors at Melwood during 2013-14, as the manager runs the rule over his youth prospects.

"It's great to go up there and train," the defender continued. "All of the senior lads are so helpful; they help you with every little thing. To be around them every day is just crazy. They are top players.

"You go up there and it's hard to be yourself, but that's what the players help you try to do; the manager and the coaching staff try to help you be calm on the ball, confident and play how you usually play.

"You don't know when [your chance] is going to come. You've just got to keep working hard and trying to please the manager in every training session and game.

"I played a few more games for the U21s and I was doing well. Over Christmas, I went up to Melwood for about two weeks. I first got into the Manchester City squad and then got into the Chelsea squad and was lucky enough to come on."

A debut in the Premier League was an unexpected and remarkable conclusion to a difficult period for Smith, who spent 10 months on the sidelines with an anterior cruciate ligament injury.

On his return to U21 duty, the left-footer had curled an outstanding finish into the top corner during a rout of Tottenham Hotspur, paving the way for a first-team experience to follow.

He added: "It was crazy, coming from the injury and trying to come back from what was such a hard thing.

"To come back for the Tottenham game, my first game back, score a goal and have a good game was an unbelievable feeling.

"I have been doing well in the U21s and it has been going well. It was a great feeling to get a goal - I don't score that many goals. It has helped me a lot.

"My aim is to play regular football and hopefully go up to Melwood full-time, train there and learn more. Hopefully I'll get into a few first-team matchday squads."