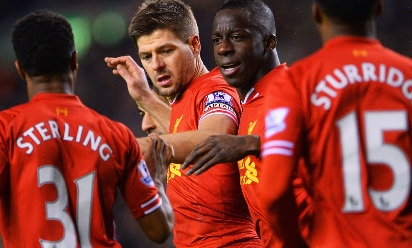 Fenway Sports Group watched Liverpool recover from a two-goal deficit to salvage a point from an exhilarating 2-2 draw with Aston Villa in the Barclays Premier League on Saturday evening.

While the visiting John Henry, principal owner of the Reds, and chairman Tom Werner could not enjoy a victory on Merseyside, they witnessed evidence of the tenacity and spirit the team possesses.

Villa had stunned the home crowd into silence through quick-fire conversions by Andreas Weimann and Christian Benteke, only for the fit-again Daniel Sturridge to net at the other end seconds before half-time.

Steven Gerrard hauled his team level six minutes into the second half by stroking in a crucial penalty at the Kop end, although the Reds' winning streak on home soil was ultimately ended despite their subsequent exertions.

When the teamsheets were handed in an hour before the action got underway, Brendan Rodgers' selection showed one change to the team that downed Stoke City, with Sturridge named from the start in place of Lucas Leiva.

Within 45 seconds of kick-off, Villa should have taken an immediate lead - Gabriel Agbonlahor latched onto a looping header in behind the Liverpool defence but, when faced with Simon Mignolet one-on-one, could only poke his attempt the wrong side of the post.

Weimann and Agbonlahor were then thwarted by tackles from Martin Skrtel and Gerrard respectively, as Paul Lambert's team set off in search of a repeat of their 3-1 victory on this ground last season.

On the quarter-hour, the travellers threatened again. From a rapid counter-attack, Weimann was afforded time on the right flank to pick a cross that fell for Ashley Westwood, who could only unleash a straight strike at a comfortable height for the Reds' goalkeeper.

Proceedings almost moved in the opposite direction on 21 minutes, when Sturridge dispatched a curling lob from 20 yards which narrowly carried over the crossbar, but seconds later Villa struck the woodwork.

An outswinging Westwood corner from the right in front of the Kop was well placed to find Ciaran Clark rushing in from the edge of the penalty box, but fortunately the defender's powerful header was planted against the foot of the post.

It proved a stay of execution, however; 25 minutes into the half, Agbonlahor sped along the left wing, worked a yard of space around Kolo Toure and drilled to the back post for Weimann to convert from what television replays suggested was an offside position.

In response, Raheem Sterling blasted a shot at Brad Guzan from a narrow angle after connecting with a dinked Luis Suarez pass, but the second ripple of a net would actually occur at the other end of the field.

With 36 minutes played, the effervescent Agbonlahor popped up on the right hand side and lashed a dangerous cross across the Liverpool box which eluded Mignolet's reach and allowed Benteke to nod into a gaping net.

Suarez attempted to take sole responsibility for producing a reaction by slaloming between the flailing Villa defence, but when his set-up arrived at Aly Cissokho the French full-back sliced an inviting opportunity wide.

The Reds did reduce their arrears in added time of the opening period, though - Suarez directed a pass into Jordan Henderson, who flicked through to Sturridge and the No.15 instantly clipped beyond Guzan to set the score at 1-2 before the interval.

Rodgers' initial reaction was to introduce Lucas for Philippe Coutinho at the outset of the second half and, eight minutes after the resumption, the manager received exactly the result he was hoping for.

Gerrard dissected the Villa backline with a long drive into Suarez, who burst forward and was downed by the outrushing Guzan in the area; the skipper then stepped up to side-foot past the American after the referee had pointed to the spot.

The noise by now was deafening inside the ground as the hosts looked for a third, but Fabian Delph issued a warning riposte when he launched a troubling shot from the edge of the area which did not quite bend enough to beat Mignolet.

Into the final 30 minutes, quick-thinking from a set-piece by Glen Johnson released Suarez with space to cause havoc - on this occasion, however, the Uruguayan's volley was handled by Guzan.

The visiting stopper was required to be at full stretch to palm out a precise Henderson strike following a Suarez delivery into his strike partner, Sturridge, which the latter had cleverly redirected to the midfielder.

Suarez lined up another special free-kick from around 35 yards in the 77th minute and Guzan was sprawling across his goalline when the No.7 let fly - but, from Liverpool's point of view, it drifted narrowly too wide.

The Premier League top scorer was denied at the near post by the busy Guzan in stoppage time, but the winner would not arrive for the Reds, leaving both teams to take the positives from a point.