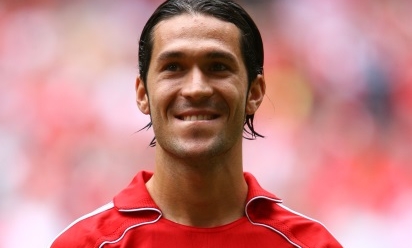 'We have more than just Luis to stop'

Imagine the feeling of hearing thousands of people chant your name with a fondness reserved only for an elite number. Would you dare to dream such an honour could last long after your departure?

For the man who 'came from Barça to bring us joy' that fantasy is reality; almost seven years after Luis Garcia's three-season stay at Anfield concluded, his personal song remains a regular on the Kop.

It's a tune which poignantly drifted across Merseyside throughout last week following the Spaniard's sudden announcement of his immediate retirement from professional football.

Liverpool supporters could not help but instantly recall the string of Garcia strikes which carried their club to the 2005 Champions League final and the subsequent drama of overcoming AC Milan in Istanbul.

Hundreds and thousands of messages of gratitude and well wishes were dispatched to the 35-year-old when the news broke - a groundswell of support that the former attacker will never forget.

"It meant everything. They know what I feel about Liverpool, the fans and the city," he reflected to Liverpoolfc.com several days after his decision had been publicised.

"I was so proud that I had the chance to be there, to enjoy the crowd and all the things we did in the past. I'm going to be a Red for the rest of my life.

"I'm very happy to hear those kinds of things. The fans know what I feel. It's not easy to finish playing for Liverpool.

"After seven years, they are still singing my song and sending me messages, asking me how I feel and where I am - and if I'm coming back. It is one of the most important things I've ever had."

A return to his home country and a second spell with La Liga outfit Atletico Madrid beckoned for the diminutive, tricky playmaker when he left Liverpool in the summer of 2007.

His career journey would later involve a period in Greece before he was enticed by the challenge of league football in Mexico, where he would participate in the last professional fixtures of his life.

Midway through his 30s, Garcia found himself in a position to consider 'no regrets at all' in the experiences he had undertaken and believed the time was right for family to claim primary focus.

"It was difficult to make the decision, it wasn't easy," the Spain international, who racked up 18 appearances for his country and played at the 2006 World Cup, continued.

"I had many years playing football, concentrating on many games and training. It's not easy to stop doing that - the thing you have done all your life.

"But I'm happy that I had a good career, in big teams and enjoying playing football. It was difficult but I have retired now and I have to start thinking about other things.

"I have been playing football for many years, playing outside Spain - away from family and friends. Last week, I was thinking about that and having my family close to me.

"I talked to them and it was a tough decision but, in the end, it was a good one. It was the moment to stop playing football and to start enjoying my friends and family.

Garcia pulled on a Liverpool shirt 121 times in his three campaigns, blasting 30 goals - five of those were converted in the knockout stages of the Reds' successful 2004-05 Champions League quest.

Memorably, a blistering, long-range volley that soared over goalkeeper Gianluigi Buffon and nestled into the top corner provided the edge in a quarter-final meeting with Italian giants Juventus.

Then, on an evening when decibel levels in L4 possibly achieved an historic high, the Catalonia native forced a finish home - 'Over the line? Sure,' he insists - after four minutes which ultimately proved to be the semi-final clincher against Chelsea.

Casting his thoughts back nearly nine years, Garcia said: "I've been at big clubs in my career, but to feel what I felt and to win the Champions League is everything for a player.

"I know there have been more trophies won in the years since, but talking about the special one - making history is the most important thing that can happen for a player. I still watch the final sometimes.

"Everything came together; a good team, a good relationship between the players, the manager and the club. We were like a family. That allows a footballer to show his best, and I think that's what happened to me.

"I played good football in Barcelona and Atletico Madrid, and even Mexico, but we were the strongest then and that's why I showed my best football.

"The goals that everybody remembers are the volley against Juventus and the goal against Chelsea. Those are the two that people are going to remember for a long time."

Given the frequency of renditions of the Garcia song at Anfield, the memory is still fresh for Liverpool fans - who will be pleased to know that their voice reaches the man himself.

"I have heard it a few times when I have been watching from home. It doesn't ever change," added the ex-No.10, who pledged his ambitions of visiting the Reds' stadium before the end of the season.

Supporters will know exactly how to welcome the star simply described as 'football heaven'.