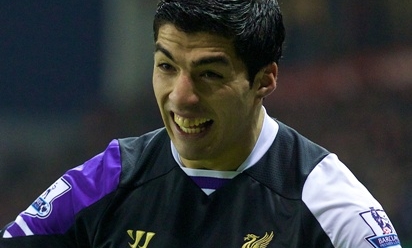 The Englishman and the Uruguayan communicated in sublime fashion during a 5-3 victory at Stoke City yesterday, each creating a goal for the other with exquisite approach play.

Suarez increased his Barclays Premier League tally to 22 at the Britannia Stadium - Sturridge has 10 himself - and Redknapp was highly impressed by the attacking exploits of his old club.

"It was a hell of a game at the Britannia yesterday, and Liverpool were absolutely formidable in attack," the 40-year-old wrote in the Daily Mail.

"They were almost more dangerous out of possession, sucking Stoke in then attacking on the break with real venom.

"Then you had the return of the SAS. To see Daniel Sturridge and Luis Suarez back at it was fantastic, scoring goals and setting each other up.

"Taking off Philippe Coutinho and sending on Sturridge shows their depth and if you're a tired opposition defender, it's a nightmare.

"And what more can you say about Suarez? He pretends to not be interested, pick-pockets the opposition and then explodes."