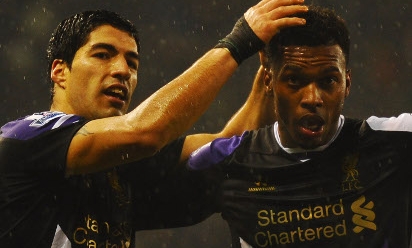 Luis Suarez registered another brace and took his tally for the season to 22 as Liverpool returned to the Barclays Premier League top four with an incredible 5-3 victory over Stoke City on Sunday.

The Uruguayan notched in either half at the Britannia Stadium to ensure the Reds returned to Merseyside with a maiden Premier League victory over the Potters from a fixture few will ever forget.

A Ryan Shawcross own goal and Suarez's first had given Liverpool a commanding lead, which was pegged back before half-time through quick-fire efforts by former Reds duo Peter Crouch and Charlie Adam.

But a Steven Gerrard penalty six minutes into the second period and a stunning conversion by the league's top scorer handed Brendan Rodgers' team another two-goal cushion.

Jonathan Walters found the target with five minutes remaining to set up a grandstand finish, but the final say went to the returning Daniel Sturridge, who fired in the closing moments to ultimately ensure a fourth away win of the campaign.

Rodgers had restored captain Gerrard to his Premier League starting XI following his comeback from a hamstring problem, while a pre-match boost arrived with the news that Sturridge was fit enough to be selected among the substitutes.

Although it was Stoke creating the pressure in the early stages with a series of corners, Liverpool provided a perfect foothold on proceedings for themselves when the clock ticked into a fifth minute.

Raheem Sterling drifted in from the right channel and his lofted cross towards the opposite flank found the advancing Aly Cissokho - the left-back sized up his options, then struck a powerful blast which deflected off Shawcross and left Jack Butland helpless.

Sterling scared the Potters once more on 20 minutes when he danced around the home defence and pulled back for Philippe Coutinho, who shifted his body to unleash a curler which travelled narrowly over Butland's crossbar.

Marko Arnautovic volleyed an ambitious effort high into the home stand and Kolo Toure was required to complete a robust header when challenged by Crouch from an inswinging corner, as Mark Hughes' men pressed for an equaliser.

Liverpool swept forward once more as the half-hour approached; Suarez misdirected a header from a promising position after being picked out by a lofted Coutinho centre. The Uruguayan then scuffed a low free-kick wide as the travelling Kop anticipated another set-piece masterclass.

He didn't let them down moments later, though, when confusion within the Potters' defensive ranks - combined with Suarez's unceasing work-rate - presented the No.7 with the chance to plant a low finish past Butland for 2-0.

Liverpool were enjoying complete dominance by this point but a former Reds striker popped their bubble, with Crouch diverting an Arnautovic cross from the left beyond the reach of Simon Mignolet to reduce the hosts' arrears six minutes before the break.

Nevertheless, a two-goal cushion could have been restored when Suarez expertly clipped a delivery into the Stoke penalty box and allowed Coutinho to drive a hard attempt goalwards which brought an outstanding save from Butland.

As it was, the two sides entered the break on level terms - another ex-LFC man doing the damage. Adam strode forward from a central midfield position and unleashed a ferocious, long-range piledriver that whistled past Mignolet after possession had been squandered.

The Potters kicked off the second period with a similarly high intensity, but again Rodgers' charges achieved the decisive contribution during the opening moments of the half.

Sterling worried Marc Wilson with his dribbling at speed and won a penalty when the Stoke defender committed to a challenge - Gerrard then stepped up to coolly place the spot-kick into the bottom corner as Butland dived the wrong way.

Coutinho shimmied between and around a succession of tackles in the 65th minute and eventually worked enough freedom to send a shot at Butland, but the low strike lacked power and the goalkeeper collected with ease.

As rain poured down with 24 minutes remaining of the contest, Rodgers introduced Sturridge to the action in place of Coutinho. Sterling, meanwhile, could only work the 'keeper when a loose ball demanded to be struck.

Stoke are not known for giving up a fight, however, and Steven Nzonzi drew a crucial block when he let fly with a well-struck effort which was guided towards the top corner from the left corner of the Liverpool area.

Three points seemed to be secured on 71 minutes when the SAS partnership resumed operations - Sturridge drove forward with possession and, when he reached the Stoke box, produced a delightful reverse pass for Suarez to instantly curl a sublime finish into the far corner.

Walters, who saw a penalty dramatically saved by Mignolet at Anfield on the opening day of the season, was denied again by the Belgian stopper - who clawed out the striker's header down from a Crouch delivery.

Liverpool's No.22 could not prevent the Stoke forward in the 85th minute, though, as Walters broke in behind the visiting defence and directed a low finish underneath Mignolet to provide an element of concern in the final stages.

But Sturridge ended any nerves among the Liverpool camp when he latched onto a cross-field Suarez pass and converted from close range at the second time of asking.

Incredibly, there was still time for Crouch to nod a headed effort against the post and Mignolet to prevent Gerrard from putting into his own net; at last, though, the referee called time and victory was secured.