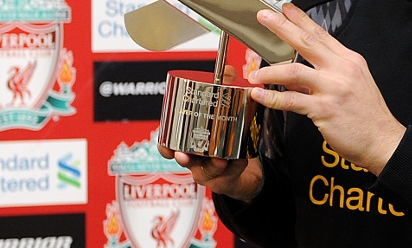 Luis: It's important we're all together

Luis Suarez has been voted Standard Chartered Player of the Month by Liverpool supporters for the third consecutive month. 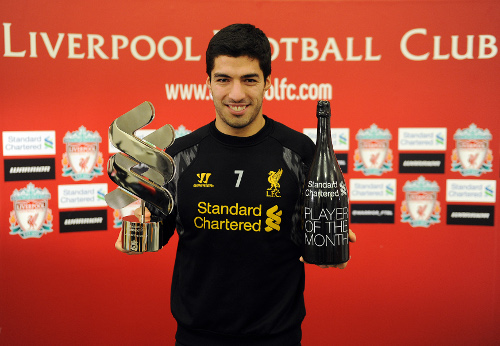 December was an unprecedented period for the Barclays Premier League's leading goalscorer, who struck 10 times for Brendan Rodgers' side.

Suarez took matters into his own hands against Norwich City at Anfield to fire four phenomenal goals before a brace from the Uruguayan helped see off West Ham United three days later.

He was handed the captain's armband for the trip to Tottenham Hotspur, where he notched two more strikes, and when Cardiff City were dismantled back in L4, the prolific forward hit a precise volley and a sumptuous curler to take his season tally to 19.

In a vote held on Liverpool's official Twitter account, @LFC, Suarez was the clear winner for the third month running - and the No.7 was presented with his prize at Melwood on Friday afternoon.

"If we can continue at this level, we can do everything - we can get into the Champions League, we have a little chance to win the title. But we know the Premier League is very difficult.

"Every moment is different, but when I arrived here for my debut, my first game, I can't forget that. It's unbelievable when I play at Anfield. In difficult moments in my life, the supporters helped me and it's important for me.

"When I was a child, I hoped to play for Liverpool and a big team. Now I am here, I am so happy. I try not to change because if you continue as the same person, I can try everything to keep calm. In the dressing room, I am the same as any other player - I am no different." 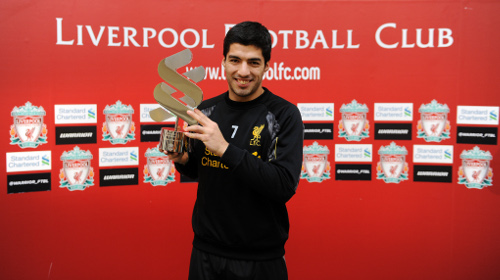