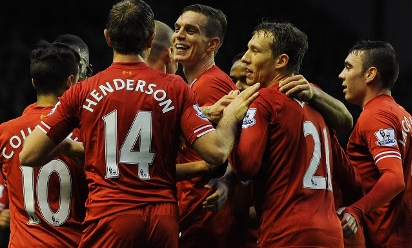 Liverpool bounced back from successive defeats and kicked off 2014 with a home victory as efforts by Daniel Agger and Luis Suarez guided the Reds to a 2-0 win against Hull City on Wednesday.

Vice-captain Agger punctuated a scrappy opening period with a well-placed header eight minutes before half-time and Suarez needed just four minutes of the second half to curl in another memorable set-piece.

The single goal in either half proved enough for Brendan Rodgers' men to seal victory and claim three points which lifted the Reds back into the Barclays Premier League top four.

Rodgers had selected defender Aly Cissokho and forward Iago Aspas in his starting XI, in place of injured duo Joe Allen and Mamadou Sakho, while skipper Steven Gerrard was fit enough to be named among the substitutes.

A piercing breeze whistled around the stadium on Wednesday and there was little encouragement provided to warm up those in attendance during the opening 10 minutes as each side searched for a rhythm.

It was the visitors who initially threatened to improve the spectacle on 12 minutes when Yannick Sagbo found a path around stand-in captain Agger and lashed a presentable volley high and over Simon Mignolet's crossbar from the edge of the area.

On the quarter-hour mark, Suarez created room on the right corner of the Hull box with fleet-footed trickery and envisioned a delicate lob back across goal - the effort was no concern for Allan McGregor, though.

The Uruguayan seemed to have reached 20 Premier League goals for the season on 19 minutes when he coolly directed a header into the back of the net from Philippe Coutinho's free-kick. Unfortunately, the linesman's flag was raised for offside.

Coutinho rifled a drive into the Anfield Road end, before Raheem Sterling was denied from close range by McGregor; Suarez had expertly released his younger colleague with an angled header, but the England international's side-footer was blocked.

The Reds forced the ball past McGregor for a second time in the 37th minute and, on this occasion, it counted. Agger leaped in the centre of the area to meet Coutinho's corner and power a header down and over the goalline for the opener.

Jordan Henderson subsequently had an inviting opportunity to double the lead before the break when Aspas diverted a Coutinho pass into the No.14's path, but his hard punt carried too wide to the left.

There was time for a final chance for Coutinho before the referee blew the half-time whistle; the Brazilian playmaker latched onto a sublime Henderson assist and strode around his marker but produced a similar strike to his teammate's previous shot.

When the two teams returned for the second period, the Kop faithful did not have to wait long to witness the net ripple again - and in doing so, Suarez clocked up a 20th goal of his truly remarkable campaign.

The Reds won a free-kick slightly to the left in Tigers territory four minutes into the half and the Uruguayan naturally took control of proceedings, bending a sensational strike beyond McGregor from 25 yards out.

As the hour mark approached, Hull boss Steve Bruce deployed a triple substitution but the introduction of Liverpool's talisman, Gerrard, following a month out with a hamstring issue merely boosted rising confidence within Anfield.

Henderson nudged a Sterling cross wide at the near post and Coutinho clipped a long-range effort off target; moments later, the No.10 smashed a dangerous, low shot towards the Kop net which required immediate attention from the visiting goalkeeper.

The travellers launched a response, with Tom Huddlestone watching a piledriver blocked and Ahmed Elmohamady volleying high from wide on the right flank as the clock ticked into the concluding minutes on Merseyside.

Not content with his earlier gem, Suarez looked for goal from around 40 yards with a set-piece but could only send the ball flying into the Kop, who brought a smile to the No.7's face by jokingly asking 'What was that?' in unison.

That was indeed that as the referee called time on the encounter shortly after, allowing the hosts to celebrate a seventh consecutive triumph on home soil and an encouraging beginning to the new year.