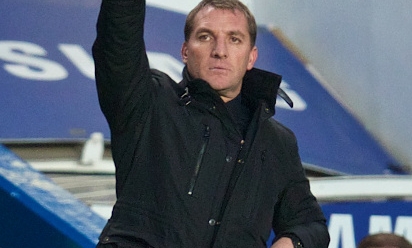 Brendan Rodgers insisted that Liverpool can look forward to the second half of the Barclays Premier League season despite dropping to fifth place with a 2-1 reverse at Chelsea on Sunday.

The Reds took control of the encounter when Martin Skrtel netted from close range after three minutes, but were pegged back and beaten by strikes from Eden Hazard and Samuel Eto'o.

Injuries to Joe Allen and Mamadou Sakho further depleted the Northern Irishman's squad, which had to be bolstered at Stamford Bridge by Academy pair Jordan Rossiter and Brad Smith.

But the boss adopted an optimistic stance after the final whistle, crediting his players for their back-to-back efforts at Manchester City and Chelsea and pointing to a friendlier fixture list in 2014.

"It was always going to be a tough schedule for us, even if we had everyone fit, because of the squad being so thin. But I can only give credit to the players," Rodgers told reporters.

"At Manchester City, we were outstanding but didn't quite get the result. Today, we showed moments of the quality we've shown throughout the course of the year and this season. We were unfortunate with the first goal, and the second one was a poor goal from our perspective.

"It shows you, even with the group we had, to keep the game so tight and I'm sure Chelsea are very happy with the win, everything about the determination and the will I have in the squad. I can give them nothing but credit.

"We're disappointed with the result, but we have taken on two squads that are some of the strongest in Europe. For us, it demonstrates again the work we have to do.

"It's open. What I'm looking forward to is the second half of the season; we have to play every team except Manchester United at home.

"We have had all the tough games - Tottenham, Arsenal, Chelsea, Manchester City, Newcastle, Everton - we have had to play all of them away from home. Anfield is a tough place to come now, so we have got all of them to play at home in the second half.

"It's still very much open. On Christmas Day, we were top of the league; a few days and games later, we're fifth. I think that's the way it will go between now and the end of the season."

Rodgers made a single change to his starting line-up against the Blues, with vice-captain Daniel Agger replacing Aly Cissokho; Victor Moses, meanwhile, was ineligible to face his parent club.

The manager now hopes that a combination of injured players returning to action and recruitment taking place during the January transfer window can inject fresh impetus for his team's challenge.

He reflected: "It was difficult, there was no balancing - we had to play the same team bar one. I looked at Manchester City's team yesterday and I think they changed seven players. Today, Chelsea were able to do that.

"But that's where we're at - the squad has been thin all year. We have been fortunate we've kept players fit. It's just unlucky that we have played two of the best squads in the league back to back. That would always make it tough for us.

"That's why I've got so much credit to give to the players, because especially at Manchester City, they were outstanding. Today, they have given everything to the game.

"Over this year and in the first 19 games this season, we have shown that if we get players back and get some help in January with a few more players, we can be in the shake-up. That was the biggest thing.

"Liverpool were never in the conversation for the last couple of years. At least now we are being recognised in terms of what we're trying to do in our work, and hopefully we can add to it and get somebody into the group because that is something that really helps you in the second part of the season."

U21s talent Smith was introduced for the final 30 minutes in West London to make his senior debut for the club, operating in an advanced position on the left flank after replacing the injured Allen.

The boss predicted a 'bright future' for the Australian-born player and explained why his first appearance for the Reds' first team should act as inspiration for the youngsters at Liverpool.

"He's only a young boy that has come back from a long injury," the 40-year-old concluded. "He's got the qualities; he's super quick.

"He's a left-back and we put him on the left side, in front of Daniel Agger, when we had to make the changes. He's a young boy that has got a really bright future - hopefully today gives him great motivation.

"It's to give the young players hope that if we are down in numbers, they are going to get a chance. Today is a good day for him and hopefully he'll learn from it."