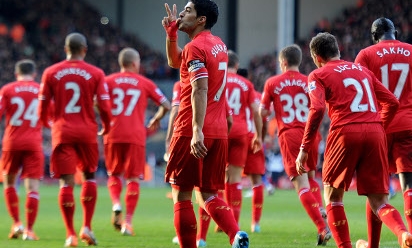 Luis Suarez celebrated committing his long-term future to Liverpool by firing two more goals and sending the Reds to the Barclays Premier League summit with a 3-1 victory over Cardiff City.

Fresh from signing a new contract on Friday, the stand-in captain fired a brace of sublime first-half efforts which sandwiched a goal from Raheem Sterling that the Uruguayan created selflessly when played behind in acres of space.

Jordon Mutch headed home a consolation for the side from Wales in the second half, but Brendan Rodgers' team took the points and now top the Premier League standings; they will enjoy first place on Christmas Day if early pace-setters Arsenal cannot overcome fellow challengers Chelsea on Monday evening.

The pre-match team news was straightforward; Suarez retained the captain's armband he wore with distinction against Tottenham Hotspur and the boss kept faith with the same starting XI which notched five at White Hart Lane.

Sterling raced in behind the visiting defence in just the second minute from an incisive Glen Johnson through ball and, when his cross was cleared high into the crisp Merseyside air, Suarez directed a volley wide at the near post.

Suarez then had an effort from a promising central position blocked by Andrew Taylor after being teed up by Sterling, who had streaked onto a lofted Jordan Henderson pass; Philippe Coutinho subsequently slashed wide with his left foot.

In response, Mutch whipped a low attempt comfortably wide from the right corner of the Liverpool penalty area, before Simon Mignolet was required to spring to his right and expertly palm away a Craig Noone curler on 15 minutes.

From the resulting corner, the tall Mutch leaped highest to glance the wrong side of the post. Then, on 18 minutes, the Reds' No.7 trained his sights on goal - on this occasion, though, his drive was merely deflected behind.

There was to be no mistake seven minutes later; build-up involving Coutinho, Henderson and Suarez concluded with the Uruguayan watching a looping cross and timing a technically brilliant volley back across goal and into the bottom corner for 1-0 and his 18th strike of the campaign.

With confidence flowing, Coutinho tricked his way into the Cardiff box from a short corner and punted a shot which bounced away off the woodwork, then Martin Skrtel powered a header over the crossbar from an accurate Jon Flanagan delivery.

Suarez switched to creation mode to slide through Sterling down the right flank, with the No.31's pace too much for the Welsh side, although goalkeeper David Marshall blocked a blast from a narrow angle well enough to send it away from goal.

With three minutes remaining of the first half, the lead was doubled through unselfish play by Suarez - when Liverpool launched a counter-attack, the forward had almost the whole Cardiff half to himself, ran through and squared for Sterling to tap into an empty net.

Unfortunately for Malky Mackay's team, Suarez wasn't finished in the first half. The Premier League's runaway top scorer latched onto a backheel by Henderson and swung a pinpoint finish into the far corner from 20 yards to increase the lead to three at the break.

There was little let-up in the second half, with Suarez releasing Flanagan on the left wing and Ben Turner having to deny Joe Allen a simple conversion from the cross; Sterling whistled a strike wide too.

Keen to join the goalscoring fun, Coutinho twisted and glided to work room for a 50th-minute attempt which travelled wide of the left post and Henderson scuffed an ambitious one as the Reds attacked in search of another haul.

As the hour mark approached, Cardiff secured an unlikely foothold in the encounter, when Mutch was left in too much space at the back post from a set-piece and afforded the chance to send a header past the reach of Mignolet.

From another inswinging free-kick, the Belgian stopper kept out a looping header by centre-back Turner, as the away side settled on a consistent tactic of sending the ball into the Liverpool area at every opportunity.

On 75 minutes, the Reds passed around Cardiff to free Sterling once more and when the winger lost control as he sprinted forward, Suarez contrived to find the outside of the post when capitalising on the rebound.

Coutinho picked out Allen from a corner in front of the Kop but the Welshman nodded over, and Suarez - targeting another hat-trick - was off target when he tried to find the top corner from the left edge of the area and had to settle for two.