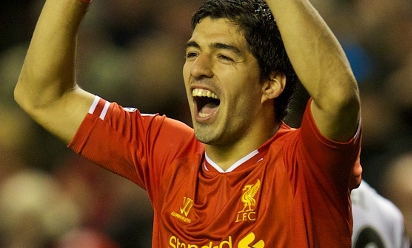 Luis Suarez was again instrumental as Liverpool ousted West Ham United 4-1 at Anfield to put pressure on Arsenal at the top of the Barclays Premier League table.

The 26-year-old was on the scoresheet twice, to complement a first Liverpool goal by Mamadou Sakho and a defensive blunder from Guy Demel.

Brendan Rodgers made one change from the side that routed Norwich City 5-1 in midweek, with Sakho replacing Daniel Agger as the defender was ruled out through illness.

The game was preceded by a minute of applause for the late former President of South Africa, Nelson Mandela, who inspired millions of lives worldwide.

Liverpool struggled to break down the visitors, who defended resolutely in the first half. Suarez put early pressure on West Ham, but watched as his delicate left-footed chip from the edge of the area drifted wide. Philippe Coutinho then tested Jussi Jaaskelainen with a powerful low drive.

Neither side settled into much of a rhythm, with the finishing not coming off in both boxes.

With 15 minutes on the clock, Simon Mignolet started a brilliant, quick counter-attack - throwing the ball out to Raheem Sterling on the left. The winger played a neat ball behind the defence to Jordan Henderson, but the midfielder shot high and wide.

Liverpool's goalkeeper produced another piece of brilliance minutes later, as he thwarted Modibo Maiga from close range. Matt Jarvis paced down the left and put in a perfect cross for the forward, but Mignolet reacted quickly to palm away the header.

The action intensified towards the end of the first 45 minutes. There was a scare for the home fans as Jarvis created a yard of space for himself and drilled in a ball across the penalty area, but it evaded everyone.

At the other end, Coutinho released Sterling with a superb through ball, but the attacker, who celebrates his 19th birthday on Sunday, skimmed his effort wide. The breakthrough finally came in the 42nd minute, with Suarez being his brilliant, menacing self.

The Premier League's current top scorer shot across Jaaskelainen and forced the 'keeper to punch out the ball, which then bounced off Demel and put Liverpool 1-0 up on the scoreboard.

The hosts continued to probe after the break, and were rewarded when Steven Gerrard's curling free-kick was met by Sakho at the far post. The French defender got enough of a touch on the ball to direct it goalwards, before Skrtel's pressure forced James Collins to put it in the back of the net.

Another great delivery from Gerrard, this time from a corner, was headed straight at Jaaskelainen from Suarez. On 56 minutes, the skipper then attempted a shot at goal himself, but pulled up afterwards and had to be replaced on his 300th league game as Liverpool captain.

The Reds continued to press, and Coutinho forced Jaaskelainen into a top save, the 'keeper diving to his left to thwart a curler from the Brazilian. Sterling then sent a shot over after great work from both Coutinho and Henderson.

West Ham were under severe pressure, but then forced some on Liverpool as Skrtel diverted a Jarvis header past Mignolet.

The visitors' relief was short-lived, though, as Suarez again showed why he tops the league's scoring chart. A magnificent cross from Johnson on the right was robustly headed in at the back post by the in-form forward, who bagged his 14th goal of the season.

There was more woe for West Ham, as Nolan was sent off for going down the back of Henderson, with his studs scraping the midfielder's calf.

And it didn't end there. Suarez employed his famous fancy footwork, creating space and a shot for himself which deflected in off Joey O'Brien, making it 4-1 to Liverpool.

The Reds' No.7 continued to torment the Hammers, as the hosts went second in the standings, making it back-to-back victories at Anfield.