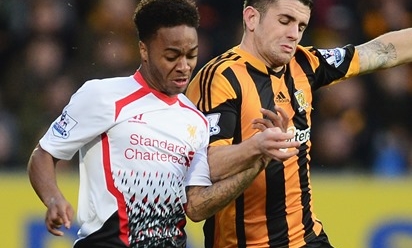 Rodgers: We made too many mistakes

Liverpool suffered their third Barclays Premier League loss of the season after they went down to a 3-1 defeat to Hull City at the KC Stadium.

The Reds began purposefully on Humberside, but they fell behind with 20 minutes on the clock when Jake Livermore's 20-yard strike struck Martin Skrtel and arched over the dive of Simon Mignolet.

Liverpool were level soon after as Steven Gerrard stepped up to curl a delightfully executed free-kick into the bottom corner from the edge of the area.

However, Hull's lead was restored on 72 minutes when David Meyler pounced inside a crowded area to drive across goal and into the bottom corner.

And the home side made sure of all three points in the dying moments when Skrtel inadvertently turned Tom Huddlestone's effort into his own net from close range.

With Daniel Sturridge out injured and Philippe Coutinho deemed fit enough for the bench only, the pre-match team news confirmed three changes from the team that began last weekend's pulsating Merseyside derby, with Kolo Toure, Victor Moses and Raheem Sterling drafted into the starting XI.

With this the first of seven fixtures in a bumper December programme for Liverpool, the visitors began the contest assertively, forcing a flurry of corners as they attempted to make an early impact on events.

However, it was Hull who crafted the game's best chance of the opening quarter of an hour, with Curtis Davies nodding Alex Bruce's centre wide of the post after the centre-back had retrieved an over-hit corner.

Moments later, the hosts were ahead. Moses conceded possession and a slick one-two resulted in Livermore driving at goal from range - the effort eventually finding the back of the net courtesy of a deflection off Skrtel, which looped the ball over the reach of Mignolet.

Liverpool, though, mustered a swift riposte and when Jordan Henderson was felled on the edge of the box, Gerrard took over set-piece duties from Luis Suarez to clip a free-kick into the bottom corner of Allan McGregor's goal with 27 minutes on the scoreboard.

The game was developing into an open contest. The Tigers' Huddlestone was next to try his luck, driving into the welcoming arms of Mignolet, before Suarez steered straight at McGregor when well placed just before the break.

The Uruguayan tried his luck once more seconds after the re-start, but his blast from an acute angle was comfortable for the home goalkeeper to gather.

Chances were proving hard to come by, however, prompting Brendan Rodgers to introduce Coutinho to the action with 25 minutes remaining in place of Sterling in an attempt to inject some fresh impetus into the Reds' attacking play.

And the diminutive Brazilian was heavily involved as Liverpool came close to taking the lead on 70 minutes; his first-time cross from Suarez's pass picked out Moses in the middle, but the Nigerian could only strike at McGregor from point-blank range.

It was to prove a miss the Reds would rue as, moments later, Hull regained the lead. The visitors were unable to clear an attack from the home side and the ball eventually broke for Meyler, who took a touch before drilling across Mignolet and into the bottom corner.

The response from Rodgers' men saw Suarez go close with a free-kick from distance, but the Tigers made sure of all three points when Huddlestone's strike was unintentionally headed into his own net by Skrtel with three minutes to go.