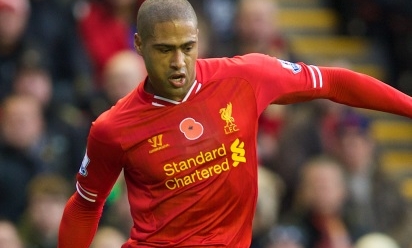 The current Liverpool team is the best that Glen Johnson has been a part of in more than four years at Anfield, the defender reflected after Fulham were put to the sword on Saturday.

A 4-0 thrashing of the Cottagers lifted the Reds to second place in the Barclays Premier League and improved their record to seven wins from 11 fixtures in 2013-14 so far.

Having joined the club in the summer of 2009 and worked with four different managers since, the No.2 has shared a dressing room with a wealth of gifted players.

None match this side, though, he claims. "We've had some fantastic players in the past that have obviously moved on," the England defender told Liverpoolfc.com.

"But in terms of a squad and starting XI, I think it's the best since I've been around.

"Every good team bounces back after a disappointing result. To do that with a clean sheet and four goals is an ideal day.

"When we lose the ball, for the next few seconds we want to try to win it back as quickly as possible. A few of our goals came from that and I think we looked good today.

"We've got to make this a difficult place for teams to come and play, and easier for us to play and get the points.

"If we keep working like that, and as we have done in the week, I'm sure we're going to give every team a good game."

After missing the defeat at Arsenal last weekend with illness, Johnson returned to the starting line-up as Brendan Rodgers reverted to an orthodox back four once again.

"I don't have a preference," he said. "Some formations work better against different teams.

"I don't mind if I'm playing right-back or right wing-back - it's pretty much a similar job."

Luis Suarez took many of the plaudits on Saturday for his two-goal haul - now eight in total since returning from suspension - and Johnson is hopeful that such form can be maintained.

The 29-year-old commented: "The longer he keeps it up, the longer everyone will be happy. That's what he's about - he's a goalscorer. He could have had a few more."

With international fixtures on the agenda next week, Johnson will meet up with the England camp for friendly matches against Chile and Germany at Wembley.

He will be joined by club colleague Jordan Henderson, who last represented the Three Lions almost 18 months ago but has reclaimed a spot in Roy Hodgson's selection.

Johnson concluded: "He deserves it. He has been working very hard; even when he first joined and wasn't getting as much football as he would have liked, he was still working hard every day.

"His performances now are showing that he deserves to be in the England squad."