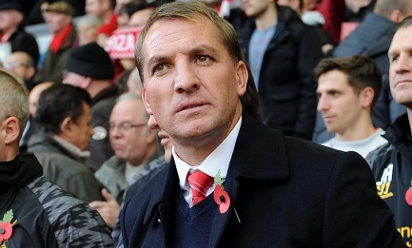 Brendan Rodgers described his Liverpool team as 'relentless' after the Reds climbed to second place in the Barclays Premier League with a 4-0 victory over Fulham on Saturday.

An own goal by Fernando Amorebieta paved the way for Martin Skrtel's header and a brace from the unstoppable Luis Suarez to hand the hosts all three points on an entertaining afternoon at Anfield.

Rodgers' team have now won seven of their 11 Premier League fixtures in 2013-14 and, though the Northern Irishman refused to look too far into the future, the boss senses a new confidence within the squad.

"If you tag that onto our form from January, it shows we're collecting points. When I first came in here, there was vulnerability in games like this - there seemed to be nervousness around the group for some reason.

"But over time, our mentality and focus in the games is good, and we're becoming relentless in these types of games. That's what Liverpool is about; the energy and that commitment to winning games are there.

"You've got to give massive credit to the players because they've got to put in the work and they're doing it.

"We played very well. Our appetite in the game was outstanding - there was a real hunger to get the ball. We had over 30 shots on goal so it was a really dominant performance, very pleasing.

"Against Palace we were in a similar sort of position and we were too slow in the second half, and the game just petered out.

"They have good players and if you're not aggressive enough in your press and coordination of your team, they can get goals. They have shown that.

"For us, it was about our hunger and to continue to turn the screw. We did that very well."

Reds captain Steven Gerrard played a crucial role in all four goals against the Cottagers, troubling the visitors on numerous occasions with his precise set-piece deliveries.

Rodgers believes there is nobody better: "After I've been here and assessed and looked at Steven, I felt that his delivery is as good as it gets.

"There is no-one that delivers a ball like Steven Gerrard. I felt the other players were not utilising the quality that we have with his delivery.

"I've just asked them to be much more aggressive when they attack the ball. Every week, I ask him where to put the ball and he puts it there.

"You saw that with the two goals from the free-kick and the corner; he has incredible quality in his delivery. Some of our combination play today was outstanding and we looked a really decent side."

The skipper was substituted three-quarters of the way through the encounter, and journalists asked the 40-year-old whether the No.8 was carrying an injury.

"He's had an issue with his hip; where I can rest him in games, I will do," the boss said.

"I thought we had enough control of the game to do that. He's a seasoned professional at the top level, so where he can get those little breathers, it's important for him."

Suarez increased his Premier League goal tally for the season to eight with two accurate conversions beyond Maarten Stekelenburg, and came close to a second consecutive Anfield hat-trick.

Rodgers continued: "I thought he and Daniel Sturridge could have had one or two more. It was a difficult day for Fulham because we were really aggressive in our game and could have scored more goals.

"Their defenders were really worked. They had two great professionals in the centre of midfield in Steve Sidwell and Scott Parker, who have been around the Premier League for a long time, but it was probably difficult for them today because of our quality and movement.

"We were excellent and the strikers, and other players, could have had one or two more goals with a little bit more luck - but we'll take four and move on."

The manager has deployed a 3-5-2 formation during the last six weeks, but switched back to a 4-3-3 system on Saturday, with vice-captain Daniel Agger returning to central defence.

Explaining his decision, he added: "It's down to the availability of the players. You always work as a coach and look at the players that you have.

"Systems can change but the style will always remain the same. It's important that we have that flexibility. We showed in those games that we could play a different system; it worked well and was effective for us.

"Today we reverted to a different system and showed good fluency and some wonderful attacking football. It's important we got a clean sheet as well. It's just about the players and what you feel the game needs.

"There is a greater understanding of what we're trying to do. Sometimes when you come into a club and you have a way and people talk about 'possession', sometimes that can go down to the players and they think it's all about possession.

"But possession is no good on its own - it has to be to penetrate. Over time, the longer we've worked together, our penetration has become much better.

"We're really aggressive in how we defend and press the ball, and that helps us to win the ball higher up the field in order to create more chances.

"It does help that you can bring the types of players in that you want - that fit your profile of the game you're trying to play.

"You see the likes of young Coutinho back today for his first start [after injury]. He's brilliant as a manager to watch, so for spectators and supporters he must just be a sheer joy. His arrogance with the football and his creativity is so good.

"All round, there is a real positive mindset. We've got good belief within the squad and thankfully we're continuing to improve, which is important."

Watch Suarez and co at Anfield in style with our range of hospitality packages. For details, click here.