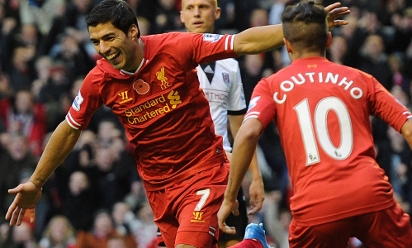 U18s down Stoke to extend record

Liverpool recorded their 250th Barclays Premier League home win in fine style with a resounding 4-0 humbling of Fulham at Anfield on Saturday.

A brace from Luis Suarez, a robust Martin Skrtel header and an own goal from Fernando Amorebieta were enough to see the Reds close the gap on league-leaders Arsenal to two points.

It was an attacking masterclass from the hosts, whose mixture of inventiveness and fast-paced play proved too much for the Cottagers. Fulham tried to contain and frustrate Liverpool in the opening minutes, but their resistance didn't last long.

Amorebieta bundled the ball into his own net as touches from Suarez and Daniel Agger went in off the defender's arm following Steven Gerrard's brilliant delivery from a free-kick.

The Venezuelan was again undone by the captain's set-piece two minutes later. Gerrard's whipped corner was met by Skrtel, who shrugged off the 28-year-old to power in a strong header.

Fulham's first-half problems were compounded when Suarez applied a clinical finish to a superb through-ball from Jordan Henderson. The striker continued where he left off after the break, and was once again deadly in front of goal after being played in by Gerrard to make it 4-0.

The pre-match team news confirmed Agger's return to the starting line-up for Liverpool, while Glen Johnson was also in the first 11 after recovering from the illness that kept him out of the 2-0 defeat at Arsenal last weekend.

Fit-again Jose Enrique, who had been sidelined due to a knee complaint, was named among the substitutes and was introduced on 60 minutes.

The hosts were in inspired form from the onset, with Agger firing over the bar from Skrtel's knockdown and Philippe Coutinho sending a shot wide - all inside the first five minutes.

The crowd were then given a taste of the show to come, when Coutinho fed Gerrard, who slipped a wonderful ball to Suarez. The Uruguayan tried to supply Daniel Sturridge, but his clever pass across goal was cut out by Maarten Stekelenburg.

The Reds' onslaught was relentless, but Fulham did try to counter through Dimitar Berbatov. The Bulgarian sent a delightful cross-field ball to Pajtim Kasami in the 15th minute, but his shot was blocked. Simon Mignolet then did well to deny Berbatov, who stretched out his foot to clip a neat strike towards goal.

That ambition from the visitors was short-lived as, a minute later, Liverpool were at the other end of the field celebrating the opener.

Sturridge, after completing a superb pirouette, was brought down and Gerrard stood over the free-kick. The skipper's delivery was inch-perfect and Amorebieta couldn't stop touches off the heads of Agger and Suarez going in off his arm.

Three minutes later, the Reds were celebrating another successful set-piece as Gerrard's robust corner was matched by a powerful Skrtel header.

The two-goal lead wasn't enough for Liverpool, who continued to pour forward. On the half-hour mark, Coutinho saw his brilliant volley, which was heading for the top corner, saved by Stekelenburg.

He was denied again a minute later, when his drilled effort was gathered by the 'keeper. Sturridge got in the mix with a wonder shot using the outside of his foot after some slick passing, but his technically-brilliant attempt cleared the crossbar.

It wasn't long before Suarez's name was flashed across the scoreboard. With 36 minutes on the clock, the attacker, who was at his sublime best again, received a neat through-ball from Henderson, and finished with aplomb, sliding past his former Ajax teammate Stekelenburg.

The skipper was again involved in the build-up to that goal, as he nutmegged Berbatov before feeding Henderson.

Brendan Rodgers' men closed the half off well and truly in control, with 16 attempts at goal and a remarkable 70 per cent of possession.

The second 45 started with the same impetus. Suarez was played in by Sturridge, but Stekelenburg beat away the forward's attempt. The ball fell to his strike partner, whose curling effort was also saved by the Dutch stopper. The clearance was directed to Suarez, but the No.7 couldn't keep the rebound on target.

With those seated in the Kop still wondering how Liverpool hadn't registered another goal, Sturridge worked his way into the Fulham area, but his attempt at a clip with his right foot went wide.

On 54 minutes, the fourth finally arrived with Gerrard again the provider. The midfielder played Suarez through superbly, and the Reds ace clinically added his eighth league goal of the season.

Suarez, determined to add to his impressive tally, watched his lob from the halfway line fail to trouble Stekelenburg, before there was a rare highlight for Fulham on 66 minutes, as Kasami's long-range strike went wide.

Suarez was in the thick of the action again, sending a curler from 25 yards over. Liverpool continued to press forward, with substitutes Joe Allen and Victor Moses on for Gerrard and Sturridge respectively, also troubling the Fulham defenders.

There was a late shout for a penalty on Henderson, but referee Mike Jones made the right call as it was an impressive tackle from Scott Parker to deny the midfielder.

Liverpool continued to put pressure on Fulham until the final whistle, to close off a brilliant attacking display which was enough to claim second place in the standings.

Watch Suarez and co at Anfield in style with our range of hospitality packages. For details, click here.