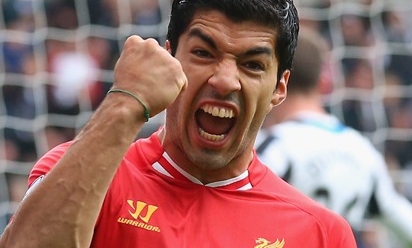 Steven Gerrard considers Luis Suarez the finest player he has shared a dressing room with during his 15 years in the Liverpool first team.

The Uruguayan has fired 57 goals in 102 appearances for the Reds since sealing a switch to Merseyside from Ajax in January 2011.

In a decade-and-a-half at Anfield, the captain has starred behind a series of lethal strikers - but none match the current No.7 in his opinion.

"The only player who comes close to producing what Luis has produced in a red shirt is Fernando Torres, but Luis has just pipped him for me."

Suarez has wasted little time in notching six times in five Barclays Premier League matches in 2013-14, helping the Reds to claim third place in the standings.

If Brendan Rodgers' team are to remain in a similar position by the conclusion of the season, the forward will be the key according to his skipper.

Gerrard added: "His goals, his performances and his form will be the key whether we finish in the top four or not. Luis is the key."