LFC TV have been broadcasting a special 'Kop Kids' week on the club's official TV channel all this week to mark the half-term holidays – and fans can enjoy a brand-new episode of the popular show today.

It's the second of two new editions this week, and it's one not to be missed as Finn tackles his biggest interview to date.

Our intrepid reporter comes face to face with Captain Fantastic himself, Steven Gerrard, at Melwood.

Elsewhere, Adam Morgan and Danny Ward try their hands at the 'What's in the Box?' challenge.

As well as all the above, your favourite regulars will feature, including appearances from Mighty Red and the Academy Skills School.

It's also available to watch on demand on LFC TV Online for FREE by clicking play on the embedded video below. 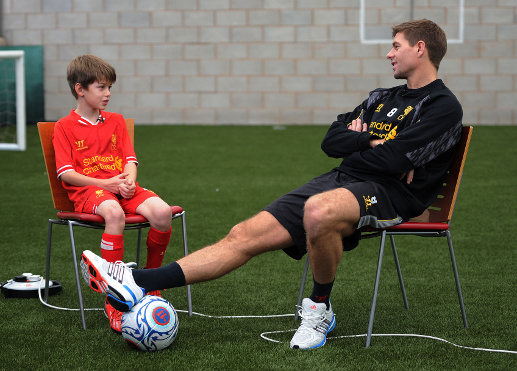 On Monday, we kicked off Kop Kids week with the first ever edition of the programme, in which LFC managing director Ian Ayre faces his toughest ever interview and Glen Johnson is put on the spot at Melwood.

On Tuesday, we aired episode two, which featured Jose Enrique and Suso going head-to-head at a series of popular children's board games - to hilarious effect.

Kop Kids 3 was broadcast on Wednesday, offering you the chance to enjoy Martin Kelly and Jon Flanagan battling it out to determine who knows the most about their teammates.

Brendan Rodgers is also grilled by nine-year-old Kop Kids presenter Finn, answering a range of questions about the naughtiest players and what he'd spend £5 pocket money on.

In Kop Kids 4, Lucas Leiva and Jordan Henderson squared up in the fairground challenge. Who prevailed at the coconut shy, the buzz wire and hook-a-duck?

Meanwhile, Finn returned to turn the interview spotlight on Daniel Agger - how did the usually cool Dane cope when being pressed by the young Scouser?

All five episodes can all be viewed on demand now via LFC TV Online.

If you're aged between seven and 11 and have a special talent you believe sets you apart from the rest, get in touch via kopkids@liverpoolfc.com now.