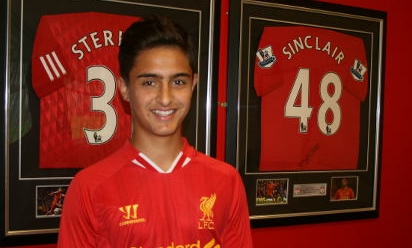 Yan Dhanda has a dream. He wants to become the first ever player with Indian heritage to play for Liverpool Football Club. 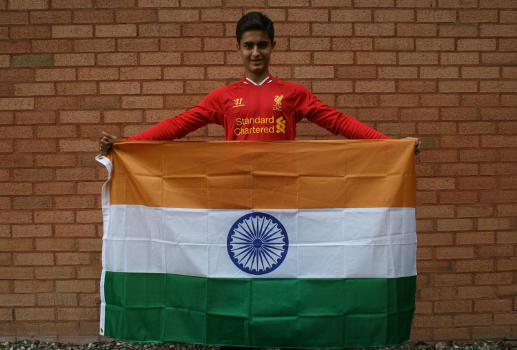 At just 14 years of age, the Birmingham-born youngster has time on his side but he's under no illusions as to just how hard he's going to have to work to turn that dream into a reality over the coming years.

Dhanda joined the Liverpool FC Academy in the summer. Having spent time at Aston Villa, Walsall, Birmingham and West Brom when he was just seven, he joined the Baggies before his ninth birthday and then headed to Merseyside to sign for Liverpool in July.

This morning he's in school in Rainhill, nine miles from the Liverpool Academy. When he's not training, he's here studying. Raheem Sterling went to the same school while Jerome Sinclair, Liverpool's youngest ever player, is a fellow student.

A typical day, he explains, will start at 7.30am. He'll have breakfast before getting picked up at 8am for school. He'll arrive at 8.30am for the first lesson of the day. Today, his timetable shows Science, followed by English and Maths, with extra maths and extra English scheduled for the afternoon.

Today, however, is not exactly a typical day for Yan Dhanda. At Liverpool Football Club, it's not normal practice for 14-year-old boys at the Academy to conduct media interviews.

However, with the youngster shortlisted in the 'Up and Coming Asian Player of the Year' category at the Asian Football Awards at Wembley Stadium on Tuesday evening, the club have granted him permission to conduct his first ever interview with the club's official Indian Twitter and Facebook accounts.

Liverpool remain the only club in the Barclays Premier League to have official social media accounts specifically for Indian fans and, with a break between lessons, Dhanda took time out from his studies to talk directly to the followers of both accounts.

In the first of a two-part interview - the second instalment will be published on the club's Indian Facebook page on Tuesday - Dhanda spoke about his young footballing life so far...

Lots of our fans in India are very excited that the club have a British-born Indian player at the club and are desperate to know more about you. Can you tell us a bit about your early life - where were you born? Where did you grow up?

At what age were you spotted playing? Can you remember the first time you started playing football?

I was at a team called Tipton Town, where I live. The scouts from the local clubs saw me playing there and asked me to go for trials. I enjoyed it most at West Brom so I went there when I was nine.

Who did you support as a kid? Did you have a favourite team?

I didn't support anybody because my dad never supported anybody.

Is it true that you won the U11 category in Chelsea's 'Search for an Asian Star' competition?

Yes, that's true. I was surprised to win because I was at West Brom at the time. I won a trial at Chelsea but I was away with West Brom so I didn't go.

How did you come to enter the tournament?

So you won the Player of the Tournament in the U11 age group?

Yes. I won the fitness award, Player of the Tournament and my team won as well.

You made a decision to join Liverpool when you were 14. How excited were you to be joining a club that's known all over the world?

I was so excited and the fact that Brendan Rodgers was manager made me even more excited. It made me want to join Liverpool more than ever because of the way he has faith in young players.

What did your family say about the move to Merseyside? How involved were they in the decision for you to move to Liverpool?

My dad was interested in Brendan Rodgers and the players he brings through. My dad really liked the coaches at Liverpool because they all worked together. My mum was more interested in whether I was going to be happy at school and with my house parents, and if I would like it at Liverpool.

Has your family moved up with you or do you live with a family here?

I live with house parents in Liverpool and I go home Saturdays after the game. If I don't have a game on a Saturday, I'll go home Friday and come back Sunday morning if we have a game.

How do you find living with house parents in a different city, away from your family?

It's fine. It was hard in pre-season. I got a little bit homesick but now I'm in a routine. I go to school, go to training, come home, eat, and then just sleep. The week just flies by. 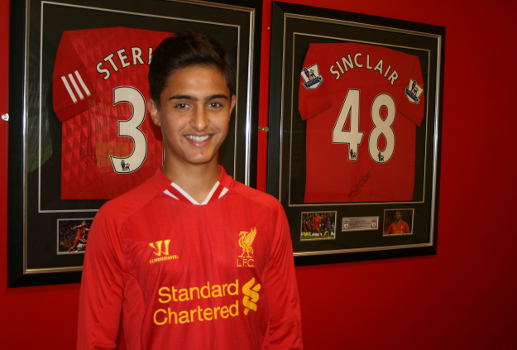 Are your house parents nice?

Yes - really nice. They're just like my nan and granddad!

You've been at Liverpool for a few months now; how are you enjoying life at the Academy?

It's really good. I've just got used to everything. I've made loads of friends. I'm learning a lot from the coaches and what the coaches expect from me.

How do you think your game has developed in the short time you've been at Liverpool?

Can you explain a typical day in your life as an Academy player? If today was a Friday, for example, what would you be doing? Do you go into the Academy as well as come to school, or how does it work?

So for our fans who don't know much about you as a footballer, tell us what sort of player you are?

Who is your football idol? Who did you grow up liking as a footballer?

I grew up liking David Silva but since I've moved to Liverpool, my favourite footballer has been Philippe Coutinho because he plays in a similar position and I try to play the same way as him.

Any other Liverpool players in the first team you admire?

I really admire Steven Gerrard for all he's done in the game and coming through the ranks. He started where I am now. Jamie Carragher has gone now but he did it the same way. I really respect that.

Have you met any of the first team or the manager yet?

Not yet. The only player I've spoken to is Raheem Sterling on Twitter. He was just giving me advice.

When you see players like Raheem Sterling and Jordon Ibe, and the players who have been given a chance in the first team, does it remind you that you are at a club that will give young players a chance if they are good enough?

Yes and that's what makes me want to keep doing well because I know Brendan Rodgers gives youngsters a chance.

What are your short-term and long-term ambitions at Liverpool Football Club?

Short-term is to keep getting fitter, work on both feet, keep developing as a player, keep listening to the coaches and learning from them. My long-term ambition would be to get into the first team before I am 20. That is the dream but I am a million miles away from that now so I just have to keep my head down and work as hard as I possibly can every day.