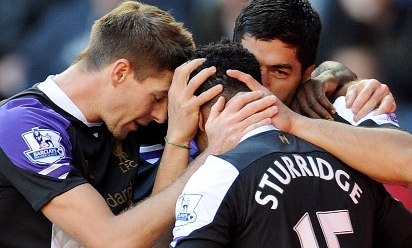 A Luis Suarez double ensured that Liverpool secured a 3-1 victory in their Barclays Premier League clash with Sunderland at the Stadium of Light on Sunday.

Close-range finishes from the Uruguayan and Daniel Sturridge saw the Reds rise to second in the league as Emanuele Giaccherini's second-half strike failed to prevent Brendan Rodgers' side from charging to victory.

Sturridge opened the scoring as he turned in a corner from inside the six-yard box before setting up his fellow forward twice to ensure that Suarez made a Premier League return to remember.

Liverpool enjoyed an encouraging opening 10 minutes and even found the net, only to be foiled by the referee's whistle.

Suarez skipped through multiple challenges and rifled wide, before Martin Skrtel thought he'd opened the scoring until referee Howard Webb signalled that the centre-back was offside.

Steven Gerrard's vicious free-kick was parried into the path of the Slovakian, who swiftly slammed a rebounding shot into the roof of the net but was unfortunate to see his celebrations cut short.

Simon Mignolet's goal wasn't threatened by his former side until the 24th minute, when the hosts rattled the woodwork from a free-kick.

Sebastian Larsson assumed the set-piece duty, swinging a curling attempt that soared just beyond the Belgian's outstretched arm and crashed off the crossbar.

So soon after nearly handing his side the lead, Larsson, who was stationed on the line when defending a corner just before the half-hour mark, failed to prevent the Reds from breaking the deadlock.

Gerrard swung the ball in for Sturridge to turn towards goal, with his attempt clipping off the Swede's swinging leg and bouncing into the back of the net.

Sturridge compounded the home side's misery minutes later when he was the provider for fellow striker Suarez to double Liverpool's tally.

Sturridge, who had already netted his seventh goal of the season, was selfless as he skipped from the right flank to prod the ball across the six-yard box, allowing Suarez to tap into a gaping net at the far post.

On the stroke of half-time Sunderland came within inches of halving the deficit on two occasions, with their first attempt expertly thwarted by Mignolet.

Craig Gardner met Lee Cattermole's looping pass over the Reds' rearguard with a poked effort that was prevented by the Liverpool custodian's trailing leg.

Suarez was afforded the briefest glimpse of goal minutes after the restart, a slight and difficult opportunity that the Uruguayan was unlucky not to take.

A corner was glanced onto the chest of the forward, who was quick to get the ball out from under his feet before dragging a powerful attempt wide.

Sunderland brought a goal back that was reminiscent of the manner in which Liverpool had a goal disallowed early into the encounter.

Ki Sung-Yueng drilled a low 30-yard shot that Mignolet failed to smother, which gave Giaccherini the chance to follow up with a side-footed effort past the 25-year-old.

Mignolet proved to be a much tougher proposition to get past two minutes later when he dived across to palm Gardner's long-range, goalbound drive wide.

As the Reds pressed forward in an attempt to re-establish their previous two-goal lead, Victor Moses came agonisingly close to gifting Rodgers' side the goal they craved.

Just inside the 18-yard box, the summer signing shifted the ball onto his right foot before slamming a deflected shot that Keiren Westwood glanced over the crossbar.

Suarez, desperate to extend his side's lead, hit two efforts in quick succession that yielded no joy in terms of finding the net. The first from the edge of the box was blocked back into his path before he adjusted swiftly to slice a follow-up shot just wide.

A 25-yard shot from the somewhat unlikely source of Kolo Toure nearly secured the Reds a third goal but his effort, which was destined for the top corner, was parried over by the diving Westwood.

But, in the closing moments of the encounter, Suarez ultimately sealed all three points for the visitors after Sturridge pulled the ball back for him to side-foot into the net to cap an impressive day from the Reds.

Watch Liverpool in style at Anfield this season by taking advantage of our range of hospitality packages.