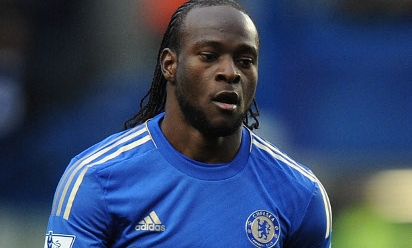 Victor Moses began his professional career at Crystal Palace after he was picked out by scouts while playing in a local league in South Norwood, London.

His school was streets away from Selhurst Park - and at the Eagles' highly-respected academy, the youngster was a revelation.

Stats from his youth career are enough to make any manager want to hand him a first-team debut at the age of 17.

Staff at Palace recommended him to Whitgift, a fee-paying school run by the second-richest educational trust in the country. There, Moses had access to top facilities and expert tuition - and his star continued to rise.

On his first appearance for Whitgift U14s, Moses fired 10 goals. He struck 50 goals in the same season.

In May 2005, a special time for Kopites and the number five, Moses steered Whitgift to U14s FA Youth Cup glory with a 5-0 win over Grimsby - a game in which he fired all five goals.

His first-team debut for Palace came in November 2007 during a 1-1 draw against Cardiff. Palace grabbed an equaliser on the night despite a certain Robbie Fowler's best efforts to distract penalty taker Ben Watson, who levelled on the stroke of half-time.

In all, the boy from Lagos, Nigeria racked up 58 appearances for the Eagles' first team, finding the back of the net on 11 occasions.

But it was a fiery streak of five goals in eight games in the build-up to the closing of the January 2010 transfer window that would propel the forward onto the radar of a host of Barclays Premier League clubs.

Wigan won the battle for his services on the final day of the window as Palace went into administration and Moses signed for the Latics under new boss Roberto Martinez.

He had to wait until May to net his first goal for the club, against Hull City. Two injuries sustained at the start of the following season left him sidelined for much of the 2010-11 campaign.

Following the departure of Charles N'Zogbia, Moses nailed down a regular starting role for the Latics and in November 2011 he netted his first Premier League goal against West Brom.

In August 2012, Roberto Di Matteo brought the striker to Chelsea, where a debut goal arrived during the 6-0 League Cup thrashing of Wolves.

In October that year, the Nigerian was named man of the match as Chelsea edged Manchester United in a 5-4 League Cup third-round thriller.

Moses netted once in the league for Chelsea during the 2012-13 season, but it was in the cup competitions that he made his mark, as Di Matteo departed to be replaced by Rafael Benitez.

Although Chelsea were destined for elimination from the Champions League, Moses popped up with a dramatic winner to clinch a 3-2 win over Shakhtar Donetsk at Stamford Bridge in November 2012.

In the Europa League under Benitez, Chelsea went all the way and Moses notched in both legs against Rubin Kazan before repeating the feat against FC Basel in the semi-final. However, he played no part in the Blues' 2-1 win in the final against Benfica.

On September 2, 2013, Brendan Rodgers swooped to capture the 22-year-old on a season-long loan.