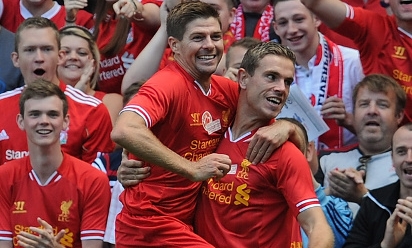 Allen's goal summed up an impressive Reds display in the first-half before Henderson calmly chipped the second in with his very first touch of the clash.

The thoroughly pleasing victory capped off a fine day as a sell-out crowd honoured talisman Gerrard, who has devoted 15 glittering years to Anfield so far.

Liverpool heroes Robbie Fowler and Jamie Carragher also made an appearance as thousands of Reds came together in an unforgettable tribute to Gerrard.

The Reds dominated proceedings as soon as the encounter got underway and this was epitomised by the pressure they exerted while restricting the Greek outfit to no opportunities whatsoever.

Just four minutes into the battle, Iago Aspas was unfortunately thwarted in a one-on-one situation with Olympiacos custodian Balazs Megyeri.

The Reds rapidly broke as Allen and the Spaniard surged towards an exposed defence. The Welshman laid the ball across to the forward in space but the resulting shot was palmed away by the goalkeeper.

The pair continued to combine, initially coming agonisingly close to breaking the deadlock before their perseverance paid dividends immediately after.

An extravagant flick from Aspas found the midfielder lurking in the centre of the box but the 23-year-old side-footed a volley over the bar before the latter's aiming was much more accurate moments later.

The forward proved to be the provider once again on this occasion, drilling across the face of goal for the Allen to slide the ball into the back of the gaping net.

Liverpool's pressing did not relent as the typically adventurous Glen Johnson nearly rifled in a second goal five minutes later.

The energetic full-back skipped inside from the flank before drilling a powerful left-footed drive that soared narrowly wide.

Brendan Rodgers' side continued the second half with the same desire that typified the first period as Philippe Coutinho looked to test Megyeri 10 minutes after the restart.

The Brazilian raced into the area and opened up for a low shot but the attempt was tame and easily collected by the Hungarian.

Coutinho's undoubted eye for a quality pass was evident yet again as he played a defence-splitting ball through to Raheem Sterling, whose effort bounced inches wide following a composed lob over Megyeri.

Sterling's passing accuracy couldn't be questioned soon after though, as he slid a perfectly-weighted ball through to substitute Henderson, allowing the midfielder to chip past the Olympiacos 'keeper with his first touch of the game to extend Liverpool's lead.

With less than 10 minutes remaining, a very familiar face in the form of Fowler nearly netted, courtesy of a through ball from Gerrard.

The captain slid the ball through to the former Reds striker whose attempt deflected into the side-netting.

In the closing stages of the game, Gerrard was withdrawn for Jay Spearing so the skipper could receive the standing ovation he deserved from a rapturous Anfield crowd.