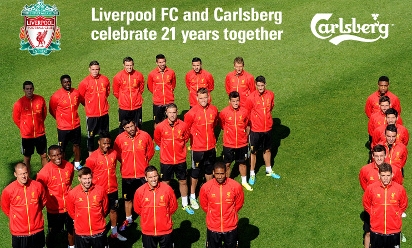 Liverpool Football Club and Carlsberg are today celebrating their partnership of 21 years by announcing a three-year extension to the leading international beer brand's sponsorship.

Already the longest-serving partnership of any Barclays Premier League club, it has now been extended to run until the end of the 2015-16 season - a total of 24 seasons.

For 17 years Carlsberg were Liverpool FC's shirt sponsor, until 2010 when they became the Reds' official beer partner. During the 21 seasons, it is estimated that more than 5.7 million pints of Carlsberg have been served at Anfield, which is more than enough to fill an Olympic sized swimming pool (2,500,000L). 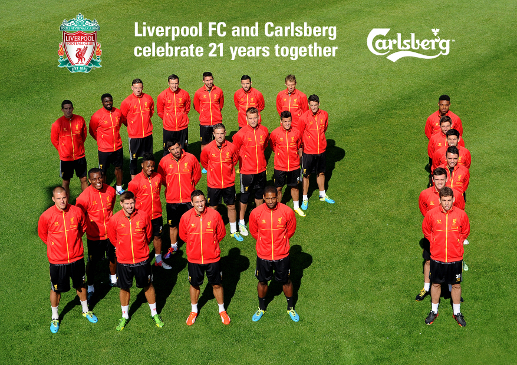 Mike Thompson, marketing director for Carlsberg, said: "Our relationship with Liverpool FC started in 1992. It was Carlsberg's very first connection to English football - an affiliation which has grown significantly.

"Over two decades later we are thrilled to be continuing our partnership with a club that has over 120 years of heritage and one of the biggest followings in football, both in the UK and around the world."

It is estimated that Liverpool FC has 588 million followers across the globe that the club interacts with on a regular basis. Recently Liverpool FC launched 15 new local language Twitter accounts, reaching fans in more than 75 different countries. This is in addition to Liverpoolfc.com, which receives seven million visitors per month, LFC TV UK, which attracts 600,000 viewers per week, and LFC TV International, which connects with 100 million homes worldwide.

Billy Hogan, Liverpool FC's chief commercial officer, added: "We are delighted to extend our partnership with Carlsberg, one of the world's leading beer brands.

"Together we have been on an incredible journey, which sees our partnership become the longest in the history of any top-flight club.

"We are incredibly proud of our partnership's longevity and the deep relationship between our two great brands. We look forward to another three years with Carlsberg, delivering exciting initiatives to our fans all over the world."