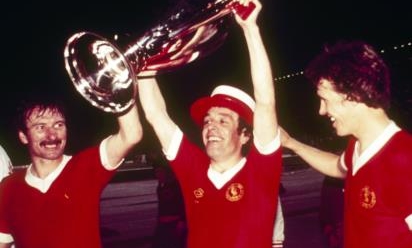 On the anniversary of arguably the greatest European match ever to be played at Anfield, author Brian Reece looks back at the historic 1976-77 season – still regarded by many as LFC's best ever campaign. 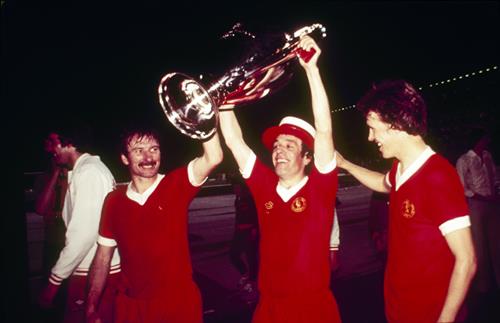 Liverpool Football Club has played its part in some great European matches over the years - twice in Rome, Paris, Wembley and that magical night in Istanbul.

But one night at Anfield, in particular, will always be seen as one of the greatest in the club's history: the unforgettable 1977 European Cup quarter-final, second leg tie against Saint-Etienne.

The season of 1976-77 has always been regarded as Liverpool's finest ever as it would start an era of unparalleled success for the club.

For the next 13 years, LFC would dominate the English league and send utter fear across European football until the mid-eighties.

It also left a legacy and culture within the club that would not only become the benchmark for future standards at Liverpool, but instilled a mentality that would eventually forge and create what LFC are today.

Even before the season started, when idol Kevin Keegan told the club that he intended to leave, the search for a new king of the Kop had begun.

The season kicked off with a win over 1976 FA Cup winners Southampton, who beat Manchester United in one of the greatest shocks in FA Cup final history. The Reds won 1-0 through a great strike from John Toshack.

By October, Liverpool were steadily moving along. Their 3-0 win against Aston Villa showed how good the season was becoming for the Reds, with great goals from Ian Callaghan, Terry McDermott and Keegan - but Bobby Robson's impressive Ipswich and Manchester City were right behind the Reds.

In November, Liverpool were top with 23 points after 15 games but a collection of four teams were on 18 points and the title race was heating up.

But things changed in December and the Reds were in trouble. Three defeats in four games - including a 5-0 loss away to Aston Villa - looked to have derailed Liverpool's title charge.

In January 1977, Liverpool were still on top of the league, if only by a narrow margin. A threatening City were right behind the Reds and had played fewer games. During February a vital 1-0 home win against Newcastle saw the Reds hold onto their lead at the top.

The month of March saw a different Liverpool, though.

Legendary goalkeeper Ray Clemence described his memories of what was to proving to be a magical season: "Every game was like a final."

As talk of the treble gathered pace, a belief within the team began to grow and the impossible dream started to become reality.

No game typified that belief more than on March 16, 1977, when Liverpool faced Saint-Etienne at Anfield in the European Cup quarter-final, second leg.

Clemence said: "It was one of the special moments. Anyone who was in the stadium, or on the pitch, will say 'Yes, we won it in Rome, but that game convinced us we could win it.'"

"And Fairclough is onside, this now could be interesting... Fairclough... Super Sub strikes again!" 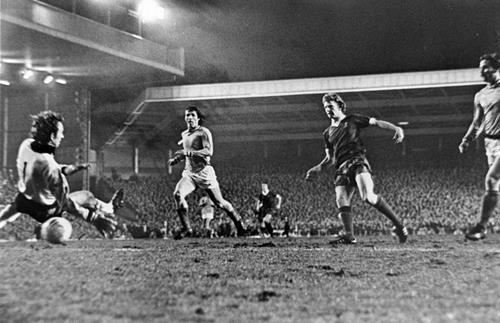 It was the moment that changed Liverpool's 1976-77 season and it would also change the club forever.

The build-up to the game that night was one of hope and expectation. Liverpool trailed 1-0, the Reds needed to win by two goals so a clean sheet was vital.

The atmosphere inside Anfield was electric, the Kop was in full voice and Liverpool's bid for a place in history beckoned.

The Reds stuck first blood - Keegan received the ball near the touchline and hit what appeared to be a cross, but the visiting 'keeper misjudged the ball and it floated into the net. Liverpool were ahead, but it was 1-1 on aggregate.

It stayed 1-0 for the rest of the first half - the treble was still on - but the Reds needed another goal.

The French side started the second half brightly, then disaster struck. A fantastic effort from Dominique Bathenay beat the outstretched Clemence and Saint-Etienne were now in control.

Liverpool now needed to score twice without reply to go through. Anfield was in complete shock, but Bob Paisley had installed a fighting spirit into this Liverpool team that was inherited from Bill Shankly's reign.

A never-say-die attitude combined with the refusal to accept defeat easily propelled the Reds to push forward in search of victory.

On the hour mark, Ray Kennedy smashed home a short-range shot and Liverpool were back in the tie. Time was running out for the Reds as both teams kept pressing and searching for the decisive goal.

As the game looked to be heading for a draw, exit from the competition for Liverpool seemed to be an inevitable conclusion.

But then, in the 84th minute, Kennedy played a fantastic throughball that split the French defence, and running onto the pass was David Fairclough.

He brought the ball under control and took a touch, then drilled a low and powerful shot that fired under the Saint-Etienne 'keeper - the Kop went into uncontrollable deliriousness. Liverpool had won the tie 3-1 and would now face Zurich in the semi-finals.

Speaking about that winning goal, Fairclough said: "For us to score two goals was asking quite a lot. I was in a no-lose situation, as it looked like we were out of the competition.

"Ray put a hopeful ball down the middle, I raced onto it, the centre-halves having been split down the middle. I had one defender to my left hand side, I thought if I shrugged him off then got the ball under control, then really all I had to do was make sure I got a shot off on target, and to give myself every opportunity.

"That's what happened, I managed to shrug off Lopez, bring the ball under control. When the 'keeper advanced I hit it low and hard under him, a great memory."

Never in the history of Liverpool Football Club had there been such an emotional, momentous, atmospheric and historically defining match as what the Anfield faithful had just witnessed.

It would become a touchstone on future European nights at Anfield, but one that in the opinion of many has never been surpassed.

The next major fixture was the FA Cup semi-final with Merseyside neighbours Everton, and it was a fantastic game - a superb advert for Merseyside.

The match finished 2-2 but the talking point wasn't Terry McDermott's stunning goal, but the disallowed effort from the Blues in the closing moments of the game.

Everton scored with moments to spare but referee Clive Thomas disallowed it - some say it was for offside, others claim it was for handball.

Either way, Everton's chance of an FA Cup final appearance evaporated in that instant. Clemence said jokingly: "It was never a goal!"

But Liverpool's captain, Emlyn Hughes, in an interview some years ago added: "He did make a mistake, he wasn't offside. Everton should have won the game because they played better than us, but the thing was, when the goal was disallowed and the game finished at 2-2, they knew they couldn't beat us in the replay, because you only get one chance."

Liverpool destroyed Everton 3-0 in the rematch.

April saw Liverpool retain their title - the first trophy of the impossible dream was secure, but heartbreak would follow at Wembley.

Liverpool faced United in the FA Cup final, and in a tense match the Manchester side edged out a tired-looking Liverpool to snatch the treble dream away from the Reds with a 2-1 victory.

But dejected as the players and all the travelling Kop were, Rome awaited.

"Oh yes, and what a delighted scorer... it's Tommy Smith!" 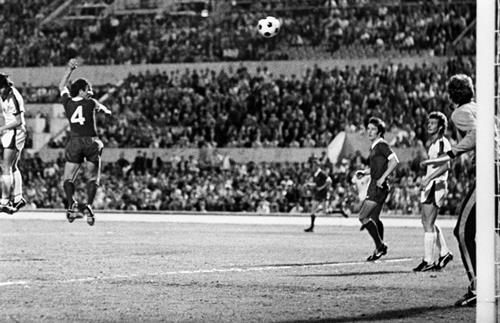 Clemence again: "All the talk amongst the lads was how on earth can we lose this game, when so many people have made so many sacrifices to get here? We went out there like the FA Cup had never happened."

Liverpool were on the brink of history. Could they finally win the biggest prize in European football for the first time? Or would they suffer another heart-breaking episode in the space of just a few days?

Rome was a sea of Red when the travelling Liverpool fans temporary invaded the Italian capital for the 1977 European Cup final against the German champions, Borussia Mönchengladbach.

Liverpool were underdogs, but certainly not overwhelmed with the task ahead. The Reds fans far outnumbered the Germans both in numbers and voice.

Liverpool looked nothing like the team that had lost the FA Cup final a few days earlier - they had composure, urgency and control. Those qualities were reflected in the Reds opening the scoring with a well worked move, which ended in McDermott converting a superb throughball from Steve Heighway.

Liverpool looked comfortable until Borussia equalised with a great strike from Allan Simonsen to make it 1-1, but Liverpool's fighting attitude and winning mentality would soon pay off, and it would come from another club legend.

The match was still in the balance when the departing Keegan started a run towards goal with the famous German defender Berti Vogts in chase.

As Keegan was about to shoot inside the box, Vogts brought the forward down and a penalty was awarded. Liverpool now had the chance to seal the match and make history. Up stepped Phil Neal, who made a small run and slotted the ball into the corner. The Liverpool bench celebrated as they knew victory had been assured. 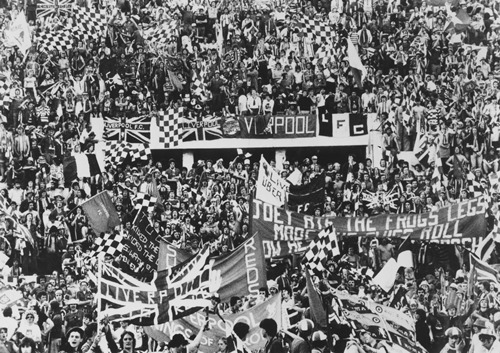 It was the club's first ever European Cup, though it wouldn't prove to be the last.

Hughes recalled: "I remember going over to Bob, giving him a hug and we both looked at each other and said 'Shanks', because Shanks had given us, given Bob, a chance to win that trophy."

The homecoming saw Liverpool's city centre rammed with Reds supporters, a fitting end to a fantastic season. But there was still time for massive news regarding transfers.

With Keegan leaving for FC Hamburg, Liverpool needed a replacement - and they got so much more. Kenny Dalglish would sign from Celtic, in what would prove to be the greatest signing Liverpool Football Club ever made.