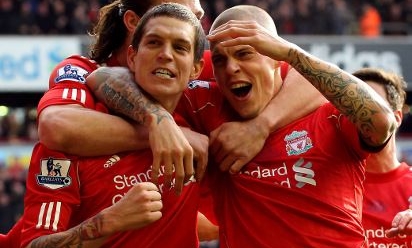 Martin Skrtel believes that a good understanding - both on and off the pitch - is the secret behind his commanding defensive partnership with Daniel Agger.

Their fierce combination at the heart of the Reds' backline has coincided with Liverpool boasting the second best defensive record in the Premier League and helped Pepe Reina keep an impressive 10 clean sheets.

Between them, the pair have made 33 blocks and a total of 73 clearances in the 15 games they both started in the centre and Skrtel explained how Agger's technical ability in particular, has allowed the partnership flourish.

"At the moment it's me and Daniel playing. It's easy to play with him, he's a top quality player and great on the ball," Skrtel told LFC Magazine. "The understanding between us is working. Away from the pitch he's a nice guy too. We have things in common, such as tattoos and cars. We both have an interest in them and chat about them.

"I don't think it's just with Daniel, I think I have a good understanding with Carra and Seba (Coates) too. They are all top quality players. It doesn't matter who starts, I think the manager had four good centre-backs to choose from. Any of us can start a game."

The Slovakian international celebrated his four-year anniversary at the club in January having signed from Zenit St. Petersburg in 2008 and this season he has been imperious at the heart of the Liverpool defence, dominating in the air.

Despite being considered a regular for some time now, Skrtel insisted he has never felt more established at the club and was quick to heap praise on the impact Kenny Dalglish has made since his appointment just over a year ago.

"I played every league game last season. But, especially during the first half of the season, I didn't feel as comfortable as I do now," said the No.37. "I think when Kenny and Steve Clarke came in a lot of things changed, not just for me but for everyone.

"I think you can see that on the pitch this season. As a team we have been better, this year I feel more comfortable at the club than ever before.

"I don't think I've deliberately tried to be more aggressive, as long as it's the right level of aggression. That's the way I try to do my job. It's the only way I know to play. Sometimes it works, sometimes it doesn't. At the moment it is and I'm delighted with the way the team had been defending this season. We've kept a lot of clean sheets and that gives defenders a lot of confidence."

Skrtel is the Reds' top-scoring defender this season with two goals.

The first was a thunderbolt of a header into the Kop net to double Liverpool's lead against Bolton in August, while the second saw him rise in the penalty area to flick a Craig Bellamy cross past Brad Guzan at Villa Park in December.

He said: "Our first job is defending and not letting the other team score. If I score it's a bonus. It's more important to protect our goal. I've hit the bar a few times and scored some goals. With a bit more luck I might get one or two more before the season ends."