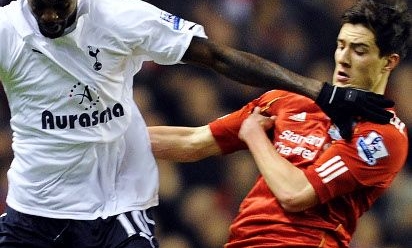 Martin Kelly believes Liverpool can draw plenty of positives from their performance against Tottenham Hotspur on Monday night, despite being held to a 0-0 draw at Anfield.

The Reds went close to breaking the deadlock on several occasions during a tense contest against the Londoners, but ultimately had to settle for a point.

Nonetheless, Kelly feels on another day Kenny Dalglish's side might have been celebrating a victory had they enjoyed a bit more fortune in front of Brad Friedel's goal.

"We had our chances and could have closed the game off and got the three points, but it wasn't to be," the full-back told Liverpoolfc.tv after his first league start since October.

"We defended well. You have to give Tottenham respect because they are a great side, but I think we had the better chances.

"Especially in the second half, we created quite a few chances but that's just football sometimes. They defended well and it wasn't our night.

"But now we've got to look forward to the next game which is a massive one on Saturday against Manchester United."

He added: "The game was quick, and you expect that from two quality sides. It was one of those nights, but we can take positives from it - we've got Luis back now and Andy Carroll won every header and was fantastic. We've got to take that into the United game and try to get a result there."

The result moved Liverpool to within four points of fourth-placed Chelsea in the race for Champions League football.

However, Kelly is adamant no-one within the Reds camp is thinking of anything other than the next game as they aim to try and secure a top-four finish.

"We concentrate on each game as it comes," he said. "We've got a point against Spurs and now we'll look at the next game and try and get three points there.

"We'll take each game as they come, that's how we do it at this club. We'll see where we are at the end of the season."

Meanwhile, Liverpool welcomed back Luis Suarez following suspension as a second-half substitute against Tottenham - and Kelly is delighted to have the Uruguayan available again.

"The crowd gave us a lift when they saw Luis coming on and it's fantastic to have him back," he said.

"He'll be a big help for us over the next few weeks when we've got big games coming up and he'll be there ready for the (Carling Cup) final."