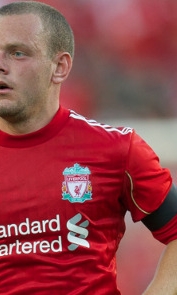 Jay Spearing is determined to prove he can be a first-team regular at Anfield, a role he's always dreamed of.

The dynamic midfielder has been a consistent member of Kenny Dalglish's squad since the Scot took over as manager in January with Spearing starting 16 games this year.

A red card on his first league start of 2011-12 at Fulham last week hasn't stopped Spearing being committed to doing everything he can to convince Dalglish central midfield is an area he has plenty of strong players in despite Lucas' recent serious injury.

"Kenny has given me a lot of confidence and has shown the faith that young local lads like me need to get a chance," he said in this week's LFC magazine. "But half of it has to do with myself as well; the effort I put in day in, day out. There's a lot of stuff in training that not a lot of people see.

"The club that I'm at; it's massive worldwide and the owners have come in and shown that they're going to back the manager. Being at a club the size of this, it is always going to attract big, big players.

"It has always been my dream to play week in, week out. So it's up to me to prove to the manager on a daily basis that when the transfer window does open and he has money at his disposal that he can look at a position like mine and think, 'there's no need to sign anyone there - we're pretty strong.'

"It's the way I've been brought up because you don't get much from life without hard work. My dad said to me that I had to take each day as it comes and prove every single day that I was better than the last one. The only way that I was going to get games was by working harder than anybody else in training; not necessarily show that I was better than anybody else but prove that I could compete and not be overawed; to show them I'm up for the fight."

The full Spearing interview, where he explains how he paid out on the bet he lost to Martin Kelly, plus a feature on King Kenny's best seven Christmases at Anfield, is in this week's LFC magazine.