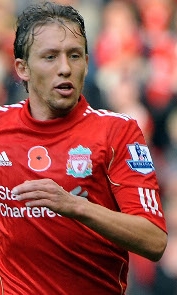 'I love scoring against Man Utd'

Lucas Leiva's impressive form during 2011 saw him crowned the North-West's Premier League Player of the Year on Monday night.

The Brazilian scooped the award at an MBNA sponsored ceremony held at Lancashire County Cricket Club in Manchester.

The gong was in recognition of excellence both on and off the pitch.

The Reds midfielder has been on international duty with his country over the past week and played the full 90 minutes in Brazil's 2-0 friendly success over Egypt last night.

Following the win, Lucas tweeted: "Well done everyone for the victory. It is always important to finish the year winning."