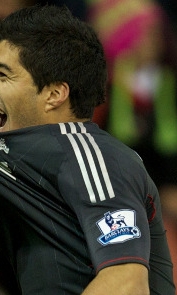 Luis Suarez's four-goal salvo for Uruguay against Chile on Friday night perfectly illustrated the all-round talent Liverpool's No.7 possesses in his armoury, according to South American football expert Tim Vickery.

The 24-year-old struck an incredible quadruple in Montevideo to ensure the reigning South American champions remained top of their World Cup qualifying group.

The plaudits for Suarez have since poured in from all quarters, and Vickery believes they're fully justified.

Speaking to 'You're on LFC TV', he said: "I remember saying on the BBC when Liverpool signed him, if I had that amount of money I would buy him without any problems just to stand him on the mantelpiece because I think he's just a superb talent.

"Him running at you would be an absolute defender's nightmare because you don't know what he is going to do.

"He is strong, quick, two footed and so unpredictable. On Friday night against Chile, he really showed the all-round talent that he's got.

"It was a difficult game against dangerous opponents in Chile, and while it was 0-0 Chile had opportunities to take the lead, but Suarez just took the game away from them by scoring all four goals in a 4-0 win with a cracking left-foot shot, a cracking first-time right-foot shot, a classic jack-knife header and a header that was built upon reading of the game and quick appreciation of the situation.

"It really was a game that showcased the all-round talent Suarez has."

News of Suarez's exhilarating display against Chile would have came as no surprise to Liverpool supporters, who watched the forward made a seamless transition in English football following his January transfer from Ajax.

After helping his country to glory in the Copa America in the summer, he was joined at Anfield by fellow Uruguayan Sebastian Coates in August - and Vickery believes the centre-back has the attributes to make a similar impact at Liverpool.

He said: "South American centre-backs usually defend deeper than is the case in the Premier League, so they've got to come over and cope with football that is far quicker when they're higher up the field.

"Coates has had an introduction. He came on in the Tottenham game in a difficult situation, made a mistake against Stoke, but the test of the man is how he responds to those early mistakes and I thought in the second half he did very, very well. That's a promising sign."

Meanwhile, Vickery feels another member of Liverpool's South American contingent, Lucas Leiva, has established himself as one of the first names on the Brazil teamsheet.

"Lucas is an absolute key man for Brazil," he said. "He is a player who the current Brazil coach Mano Menezes created at Gremio before he came over to Liverpool.

"He was playing a different role in those days - he was much more the more attacking of the central midfield two. He'd be the one who was timing his runs very well, getting forward and scoring goals.

"His characteristics have slightly changed over the years and he's now the more holding player of the Brazil midfield, but Mano Menezes has absolute massive confidence in him to play that role."