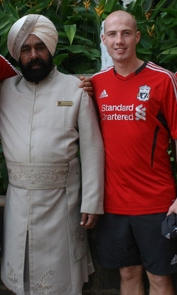 WWE star: I'd take Neville down

Coaches from Liverpool Football Club this morning touched down in Mumbai ahead of the start of the latest LFC-Standard Chartered Football Clinic and GOAL exchange programme. 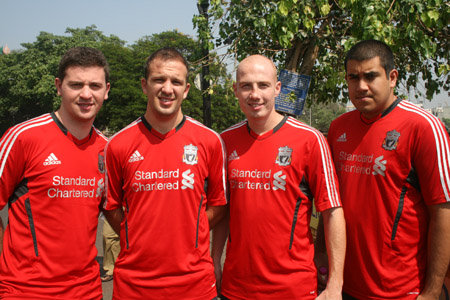 The clinic, which kicks off in India's most densely populated city on Thursday, is the fourth such venture Liverpool have participated in since Standard Chartered became the club's main sponsor with over 500 poor or disadvantaged children receiving expert coaching in Nairobi, East London and Seoul since last August.

The travelling party from Merseyside, including four coaches from LFC's award-winning Community Department and two young female volunteers from the Goals 4 Girls initiative, will be complimented on Friday by the arrival of Reds legend turned Club Ambassador Ian Rush, who has been ever present at all the clinics so far.

As well as the traditional two-day football clinic, the club will also be coaching the 40 best children to emerge from a football talent search entitled 'Go Forward' that was launched a few months ago in conjunction with Standard Chartered as well as participating in a unique cultural exchange programme between LFC's two Goals For Girls representatives and similar aged girls from the bank's own GOALS project in Mumbai.

"I think this visit will be quite quite different to the other football clinics we've done with Standard Chartered before," explained Mark Bygroves, who is in charge of the coaching element of the trip in Mumbai. "This is a city none of us have ever visited before and we feel very privileged to be able to help out in our own small way by offering lots of children an opportunity to receive the sort of coaching that is not readily available to them here in Mumbai."

Launched in September, 'Go Forward' was an initiative targeted towards nurturing the football talent of state school children from severely financially challenged backgrounds in Mumbai and giving them the chance to win not just four months of expert coaching tuition but also, for the exceptional few, the possibility of being spotted by a national I-League or Barclays Premier League club.

From over 2,500 children who initially enrolled - many of whom don't have any sporting facilities in the municipal school they attend - only 32 boys and eight girls remain and it's these children who will be put through their paces by Liverpool's coaches this week. 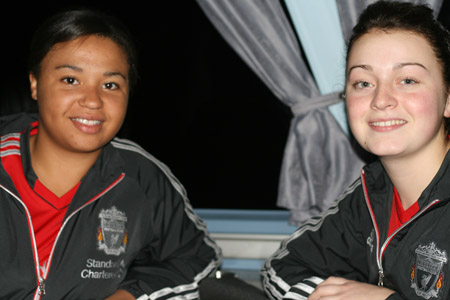 While the 40 Go Forward children will be all out to impress the Liverpool staff, for 18-year-old Rebecca Hughes (above, right) from Old Swan and 18-year-old Jade Adekoya from Belle Vale, the two Goals For Girls volunteers who have been handed this once in a lifetime, all expenses paid  opportunity to visit Mumbai with LFC and Standard Chartered, there's a mixture of excitement and nervousness.

"We've been so excited about this trip since the moment we were told we'd been picked to come but having heard so much about how poor large parts of Mumbai are, it could be quite upsetting," admitted Rebecca, who left college in May, as she travelled from the airport to the city centre hotel where the Liverpool party will be based until Sunday. "Hopefully this visit can do some good and we can't wait to meet the girls from the GOALS project and find out how similar what they do here in Mumbai is to what we do back in Liverpool. I know their project's driven by netball rather than football but it will still be interesting to see if the social messages they deliver to the kids are the same as ours."

Stay tuned to the official Liverpool FC website and Facebook page to see more reports and photos from the club's trip to Mumbai.