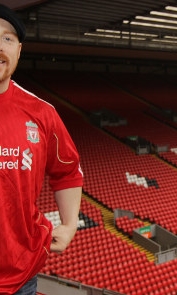 Two of the WWE's biggest stars visited Anfield today ahead of their Smackdown World Tour show at the Liverpool Echo arena.

Sheamus and Ted DiBiase Jr took time out of their preparations for tonight's event to take in a stadium and museum tour.

Both the competitors are fanatical football fans - but for Sheamus the experience held extra significance due an allegiance to LFC he's held since growing up in Dublin.

"It's been brilliant - I've felt like a little kid walking around," he beamed when chatting to Liverpoolfc.tv. "I've just been in the museum and been around the whole stadium. Liverpool are the football club I've supported ever since I was a kid.

"I've always loved them. They had four great Irish players - Whelan, Houghton, Staunton and Aldridge. I particularly loved Ronnie Whelan, I thought he was a great player.

"My uncle was a big Liverpool fan and he'd always come over to our house and bring me video tapes. I remember picking up the official history of Liverpool FC video, which ran from the very beginning until just after we won the double (in 1986). I must have watched that tape about twice a day - it was great.

"It gave me great inspiration and I fell in love with the history of the club and everything about it - and the rest is history.

"That's what I was drawn towards and in the school playground I'd be pretending to be my favourite player. It's really special for me to be here."

The duo enjoyed a behind-the-scenes tour of Anfield, which included a trip to the home-team dressing room, a walk down the world-famous tunnel and a chance to sit in the Kop.

And, as an extra treat, the WWE stars were allowed the chance to get their hands on Old Big Ears herself, the European Cup - much to their delight.

"This is unbelievable - it's a real treat for me," said DiBiase. "I know this was Sheamus's trip, but today is also my birthday.

"Sheamus knows I love football and grew up playing it. I was heavily involved in it back home in the States and almost made the national team at one point, so this is great.

"It's a huge deal because it's the first time we've filmed a TV show from Liverpool. It's going to be viewed in 145 different countries.

"It's exciting because our European fans, and our fans in Liverpool especially, are super fun to perform in front of. There's always a great atmosphere and it's always a real treat for us as performers.

"I'm really looking forward to it. I know tickets are still available, so if anyone out there wants to come they've still got a chance - but it won't last long."

Sheamus added: "It's great to be coming back to Liverpool. We've been here a couple of times for live events, but now we're doing television here. It's always a big deal for us to come over to the UK, especially for me as I am from Dublin. It's very special."

While Sheamus will compete against fellow WWE superstars Mark Henry, Christian and Cody Rhodes amongst others while in Liverpool, which footballer would he most like to perform his signature finishing move on?

"I'd definitely like to 'Brougue Kick' that Gary Neville fella. I don't know what it was about him," the Irishman joked.

"I know he played for Manchester United and there is a big rivarly between Liverpool and them, but everytime you look at him he has an 80-year-old granny's face on him - he looks as though he's eaten 10 bags of lemons or something!

"So definitely Gary Neville, I never liked him at all."

Here are a selection of images from Sheamus's visit 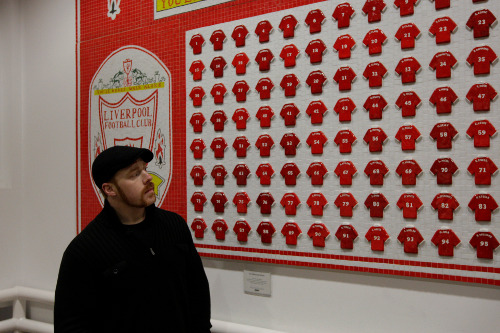