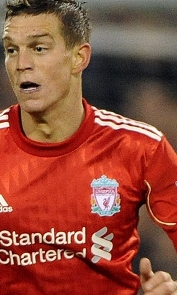 Three in a row for in-form Luis

Daniel Agger was Liverpool's star man during Saturday's goalless draw with Swansea City, according to fans who voted in our online poll.

The Danish international picked up 34 per cent of the total votes cast to edge out Pepe Reina who came second with 27 per cent.

Jose Enrique was third with 13 per cent.

Meanwhile, Enrique was named as the Liverpoolfc.tv journalists' man of the match.

Click below to watch the best of the Swansea action

Throughout 2011-12, we'll be running MOTM votes after every first-team game and compiling a league table from the results.

Suarez is currently leading the way in the fans and Liverpoolfc.tv table.