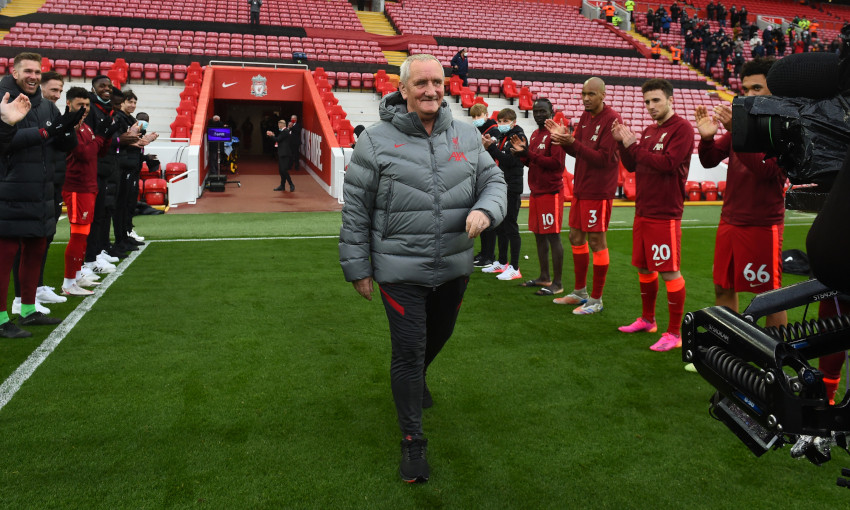 “It has been a bit overwhelming. You don’t realise people think so much about you.”

Graham Carter took Sunday’s tributes to mark his retirement from Liverpool FC in much the same manner he had approached his work at the club during the previous 35 years.

Modest and unassuming, the long-serving kit man and former coach driver for the Reds was perhaps even a little surprised by the fuss.

But the words dedicated to him by manager and captain, the guard of honour formed by the players and staff, and the special embrace with Jürgen Klopp in front of the Kop underlined the respect Graham came to be held in by all.

“It was surreal. It was strange working,” he told Liverpoolfc.com of the weekend’s win over Crystal Palace at Anfield, his final match for the Reds.

“I’m thankful for everything the club has done for me, I’ve really enjoyed my time here but now is the time for me to leave and enjoy myself with my family.”

Carter’s journey to such a considerable spell with the club – encompassing eight different managers since he joined full-time in 1986 – was unorthodox and far from destined.

He grew up in St Helens as a rugby league man, an affiliation he retains to this day, and had almost zero interest in football before a chance deployment to Anfield.

Graham joined Ellisons in 1977 and his first job for the coach company was to pick up a certain team becoming a dominant force in English and European football.

“They sent me to Anfield and I took the players from Anfield to the training ground at Melwood,” he recalled of that opening day on the job.

“We used to do that five days a week, just pick them up in the morning, take them to the training ground and then take them back. I enjoyed it, it was a great job. Then in ’86 I got the team coach driver’s job.”

He didn’t have to wait long for a big occasion after becoming an LFC employee.

Kenny Dalglish’s side followed up their league triumph of 1985-86 with a famous 3-1 victory over neighbours Everton in the FA Cup final at Wembley, wrapping up a double.

“Really good for me as well, driving through all the crowds up Wembley Way and everything. Excellent, the best day of my life that one, really.”

After more than a decade of driving the Reds the length and breadth of the country subsequently, Carter was invited to assume the position of kit man by Gerard Houllier in 1999.

He jumped at the opportunity to join the backroom team at Melwood, where he would become a popular, revered figure for the successive generations of Liverpool squads he helped to kit out. 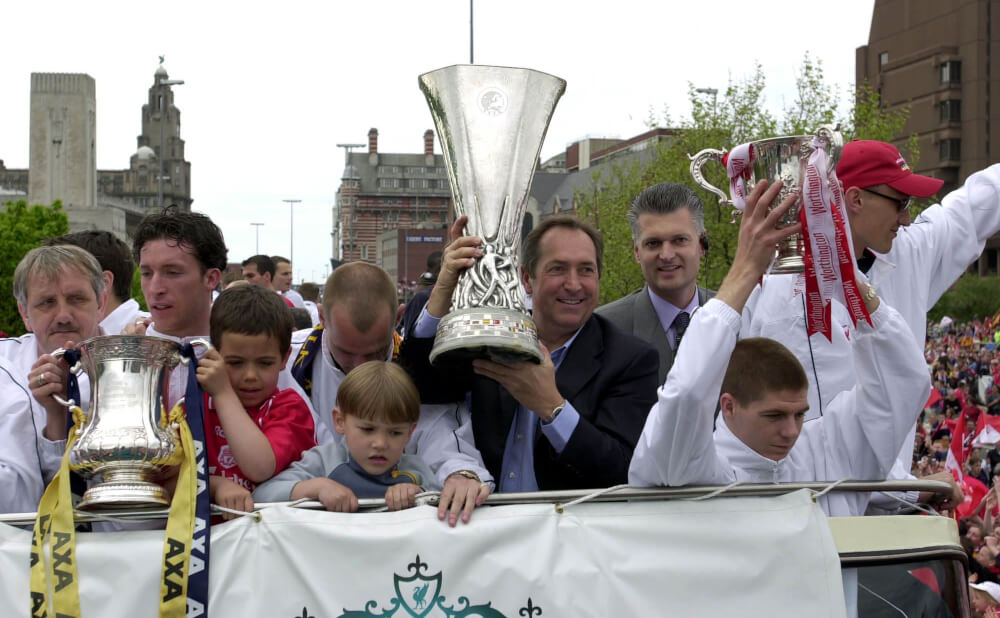 “The way people see them is different to the way I see them,” explained Graham of his relationship with the first-team players he has worked with.

“Around the club itself they’re just normal people, it’s just like being with friends really. You don’t really see the ‘megastars’. It was a great life I had – I wouldn’t change it, that’s for sure!

“All the lads, all the players have never changed over the years – they’re all very friendly. There’s no prima donnas amongst them, they’re all decent lads. They’re all good lads. It’s just like working with your mates really.”

While faces, facilities and football itself have changed around Carter during the past 22 years, the specifics of his daily work remained largely the same.

Ensuring pristine kit for every training session, match, away trip and pre-season tour – the latter cited as the hardest aspect of the role – was always the job well done.

“Pre-season is hard, always hard. Anybody will tell you that’s the hardest part of the season – there’s a lot more players.

Carter had to include some extra items when Liverpool travelled to Istanbul to face AC Milan in the 2005 Champions League final.

T-shirts bearing the slogan ‘Champions League Winners – Istanbul 2005’ had been pre-prepared in the event that Rafael Benitez’s team claimed victory at the Ataturk Stadium.

Understandably, at half-time Graham began to pack them away to be unused and forgotten, with the Reds being outplayed and trailing 3-0 to the Serie A side.

“I hid them! I tucked them away and hid them,” he revealed with a laugh. “Then when we won it on penalties I started running across the pitch – and then realised, ‘I best go and get the T-shirts!’ So I ran back!”

Jürgen Klopp: “Honestly, it’s really difficult to speak about Graham without getting wet eyes because I will miss him so much. Because the hug he gave me always before the game is like the hug from my dad was. Unbelievable, and that’s why I [will] miss him.” 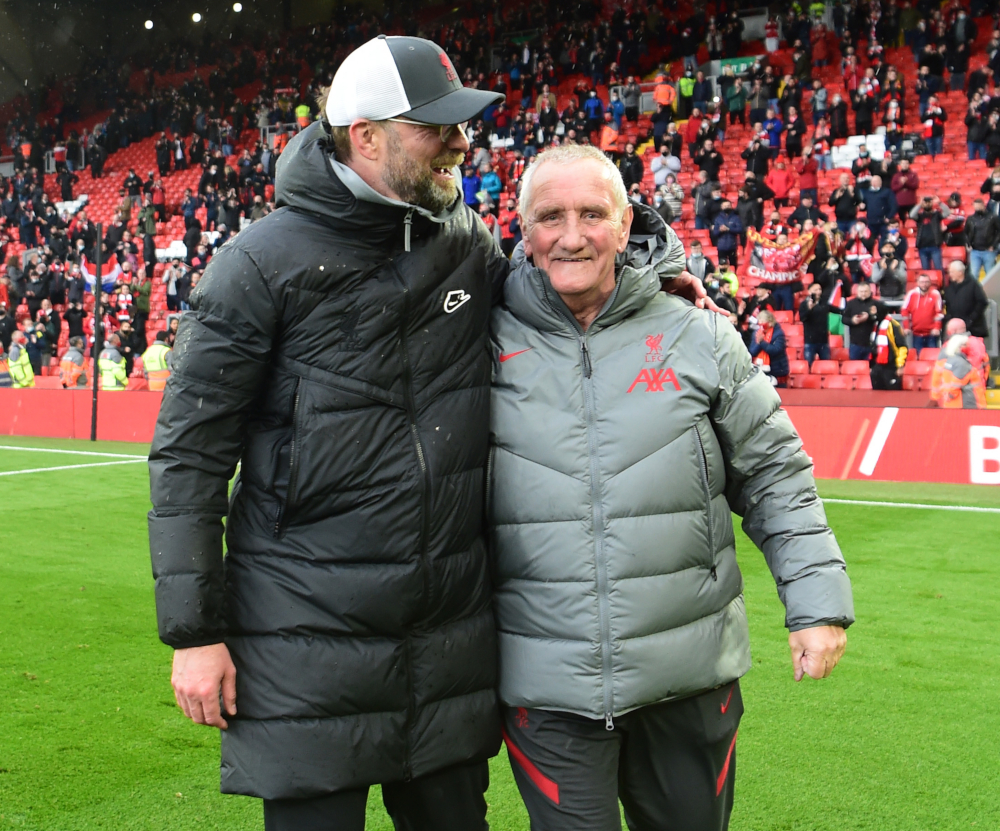 In the many tributes and comments that have poured in from former Liverpool players during recent days, you may have spotted Carter being affectionately referred to by a different nickname.

“They christened me ‘Helmet’ years ago,” he said. “Carra still calls me it now.

“Years ago I had long hair and it was Mark Lawrenson who gave me the name, I’m sure it was. And it’s stuck, everybody has called me it through the years.

“Apart from the lads here now because now Carra has gone I don’t get called it so much now. Lawro started it and Carra has carried it on.

“Even Kenny calls me Helmet, he still calls me it every time he sees me. They always have done. I don’t mind – call me what they want, as long as I’m doing my job I’m not bothered!”

But now, Graham’s work is done.

After 35 years of service to the club, from Dalglish’s double to four major trophies under Klopp and plenty of unforgettable experiences in between, he happily heads into retirement.

“The decision was made about halfway through this season,” he said. “I went to see Ray [Haughan], who is my line manager, and then the boss and said, ‘It’s time for me to go.’

“I had a health issue in the beginning of last year and I was off for seven months and I just decided then it’s time for me to leave to spend some time with the grandkids and the family.

“[LFC] changed my life altogether because I was just a coach driver. All of a sudden I’m a coach driver for Liverpool and then I get the job as a kit man.

“I’ve had a good life out of it, I’ve made a good living here and I’ve enjoyed it here. To do all that and enjoy what you’re doing as well is brilliant.”