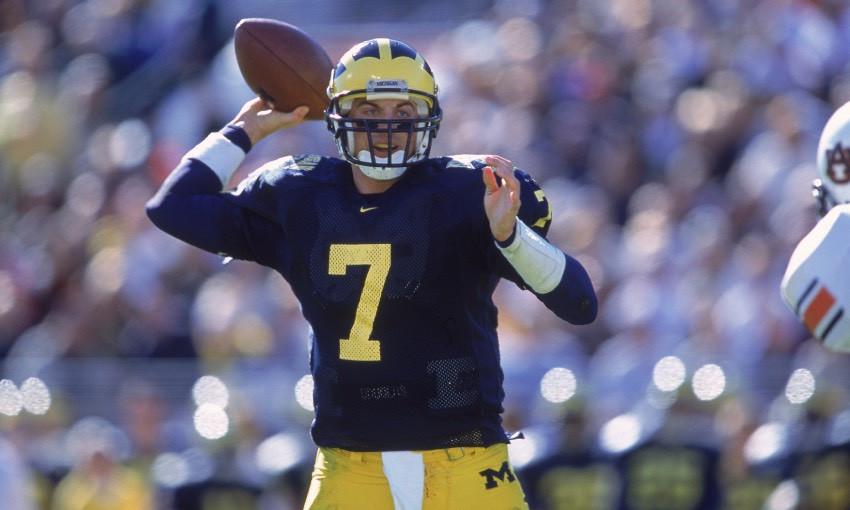 The view from West Ham with KAWALA's Daniel McCarthy

As Tom Brady goes through his final preparations in the quest for a seventh Super Bowl ring, a former teammate will be tuning in to another colossal sporting event.

It's Brady versus Patrick Mahomes in the battle of the superstar quarterbacks on Sunday when the Tampa Bay Buccaneers face reigning champions Kansas City Chiefs in the NFL's showpiece.

Before that, however, is Liverpool's clash with Manchester City at Anfield in the Premier League.

Which makes it a glorious day of sport for Drew Henson.

Henson has admired Brady for more than two decades since battling the future Hall of Famer for the starting quarterback job at the University of Michigan. Henson also happens to be a passionate Red.

It was towards the end of his career as a pro athlete when Henson's attachment to LFC began. From then on, he and his family have been tracking every match, transfer rumour and development.

Liverpoolfc.com caught up with the former NFL passer and New York Yankee ahead of Super Bowl LV...

So Drew, why Liverpool FC for you?

For me as just a sports guy, I love tradition – it's always my thing. When I had the chance to choose schools, Michigan's tradition, the helmets, the decades of success – those were all the things that were super important to me. I was lucky enough to play for the Yankees, who had a lot of the similar traits in that regard. I kind of lucked into watching Liverpool and then once I got to really get to it, it was like, 'Man, these are my people. I got to get over there to a game and really experience it.' It was 2009, we had the chance to go over in person for the Man United [game] and see the museum. Then of course for the game and the atmosphere, the Kop, it was just so much to take in and they won. After that, I was just hooked.

I've been lucky to play in Michigan Stadium, the biggest stadium in our country, and play next to Derek Jeter in New York. The experience at Liverpool was something I'd never felt. It's something I try to tell our people here: if you took all four major sports in a city like Philly or New York but you just focus it all with one sport and one team, that's what the passion feels like.

You've played sports for most of your life, so it must be nice to be simply a fan of Liverpool?

I check the schedule, I go through the apps seeing what Klopp is having to say for the day, see what the team's health is like and kind of getting a feel for the fanbase. I have an eight-year-old daughter, Perry, and she's in the middle of her soccer season right now. But originally her first experience of soccer was through Liverpool's Little Reds academy here in Tampa. She's a Liverpool fan, she says she plays for Liverpool. She'll have a trip when we can get her over there sometime soon.

I know he has no experience coaching American football, but do you think you'd have done well if Jürgen Klopp coached you?

He's the type of personality I think I would have responded to very well. He's going to challenge guys mentally with thoughtful comments. You don't ask him a question and get a stock answer. He pauses, he thinks about it and gives you a well-thought-out answer and it might not be what you expect him to say. It's hard to lead men at the highest level and to really get the most out of them. I saw Robert Lewandowski had an article a couple of weeks ago where he called him 'the bad teacher' as a compliment, just that Klopp pushed him to get the most out of him. Players, especially the best ones, appreciate that, they like being coached and they like the fire. He's never going to throw a guy under the bus, he's got his players' backs and they know it – you see that on a day in, day out basis.

For Lions fans, they’re getting a guy in Dan Campbell that will build something that represents Detroit well. Tough… https://t.co/CNVYy5w2pl

Do you fancy anybody from this Liverpool team to be a good American football player?

Virgil, he's a crazy athlete and I'd love to stand next to him myself and size him up. He's a guy that probably could be a wide receiver, a basketball player if that'd been what he picked up. A reason I appreciate soccer as well from a quarterback's perspective is passing and angles. How all that works together, they all have to be on the same page, being onside when making runs. It's beautiful when it works. You can just picture those guys [Sadio Mane and Mohamed Salah] in the slot, running combination routes with the ball in the air, I think that'd be awesome.

The fact that this has never happened before and some of the stats he has, you just couldn't imagine it. I couldn't be happier for him. When you spend time when we're young, competing together, competing against opponents, everyone has these dreams that you're trying to achieve. To see him get that opportunity and continue to just represent Michigan... he's just been a top-notch guy. The work that he puts in that people don't understand to keep doing this, I really think he understands when you're done playing, like you're never going to find that again – that passion of being on the field, the adrenaline and everything that goes along with it. I just couldn't be happier for him and I'm hoping they pull it off.

But on the other side is the wondrous Patrick Mahomes. Like you, he was actually drafted by the MLB, too. You just get the impression that he'd be good at anything he put his mind to, even our kind of football...

No doubt. He's just the type of athlete where things are smooth and he reacts so quickly that I don't think people can appreciate it unless they would see it in person. I could see him being a central midfielder, a winger. His feel of where he is compared to everything else on the field is incredible. I've got to believe that they are hyping this Super Bowl a little bit because you've got the greatest quarterback of all time versus what could be the only guy that could challenge that over the next 10, 15 years.

What's your prediction for the Super Bowl then?

I can't pick against my guy Tom Brady. It seems like when the stakes are highest, he's in his comfort zone, he's just found a way to make the plays. Sometimes it's the mistakes you don't make, just playing smart under pressure. But again, Patrick Mahomes is something you haven't seen before. I think the game will be a high-scoring game, probably where the team with the ball last will have the best chance. But I think Tom, especially the way his career has gone, to win the Super Bowl in their home stadium just seems like this is the fitting end to this season. I'd say 35-32 to Tampa.