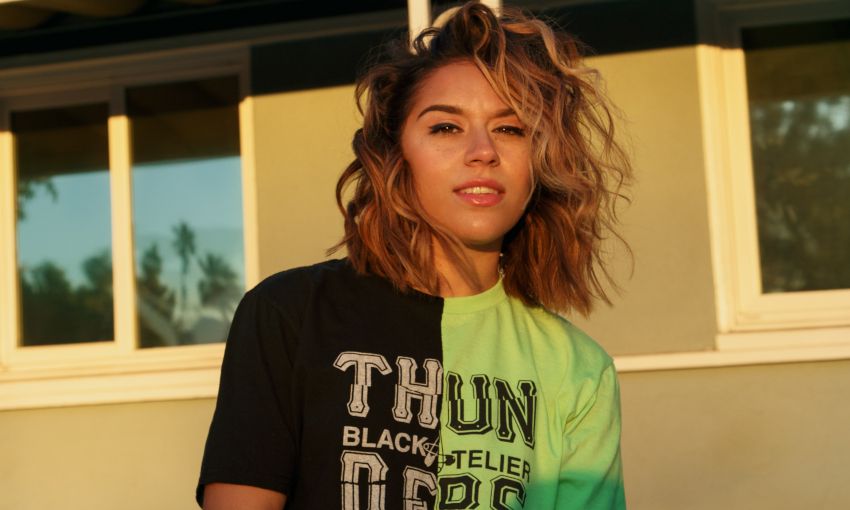 Chelcee Grimes has explained the inspiration behind her new song on the soundtrack for The End of the Storm – the feature-length documentary about Liverpool's Premier League title win.

Simply named Liverpool, the ballad is one of eight to feature on the album, alongside Lana Del Rey and Jamie Webster among others – and the singer/songwriter and lifelong Red is delighted to be a part of it.

“My track Liverpool is the opener on The End of the Storm soundtrack,” Chelcee told the official matchday programme for Sunday’s game with Wolverhampton Wanderers. “I wrote it a couple of years ago with my mate Olly but was thinking that not many people would ever get to hear it.

“Then I was told that Liverpool FC wanted to use it in The End of the Storm film. It starts it off and I think it’s perfect. I showed my grandad and he had a little cry!

“I’d been staying with family in Liverpool then went back to London and was feeling a bit down so I wrote it because I was missing the city.

“I think the record company thought it was maybe a bit niche and wouldn’t appeal to people outside the city, but it fits really well with this film. Lyrically it sounds as if it’s written about a person but then in the chorus says, ‘I miss you, Liverpool.’

“I’ve had really positive messages from fans saying they love it, which is great to hear. They’ve said it was a nice emotional touch for them because it’s a ballad rather than a big, heavy-hitting record.

“It has Beatles-type chords and Beatles-inspired backing vocals with ‘oohs’ and ‘aahs’ so hopefully it pays homage to the city in all ways, not just in the lyrics but even in the musicality of it.

“I’m looking forward to hearing it being played at Anfield. You never know, people might make up their own lyrics and adopt it as a song on the Kop!

“I had the soundtrack launch on Zoom recently with Sir Kenny Dalglish, John Bishop and a few other good people, which was a bit scary! The record has some great artists on there like Lana Del Rey and Jamie Webster and the film’s amazing. I’m sure it will do well and hopefully we can help raise some money for the great work done by LFC Foundation.”

LFC Foundation, the Reds' official charity, will be the beneficiary of profits from the sales of the official soundtrack of The End of the Storm.

Project-managed and released via TaP Music, the soundtrack is available now following the documentary’s release on Monday November 30.

Lana Del Rey’s rendition of You’ll Never Walk Alone will also be released on limited-edition seven-inch vinyl, produced by TaP Music and available exclusively on LFC platforms and Del Rey’s website. The vinyl is available to pre-order now and will be available in LFC stores from Friday December 11.

Funds generated by the sales of the vinyl and digital soundtrack will enable LFC Foundation to further support its inclusion and disability football programmes, initially in the Toxteth area of Liverpool and then other high-need areas across the city as the initiative develops. These programmes will increase the diversity among participants within LGBTIQ+, gender, ethnicity, faith and disability groups, and will include free weekly coaching sessions, holiday camps and community football festivals.