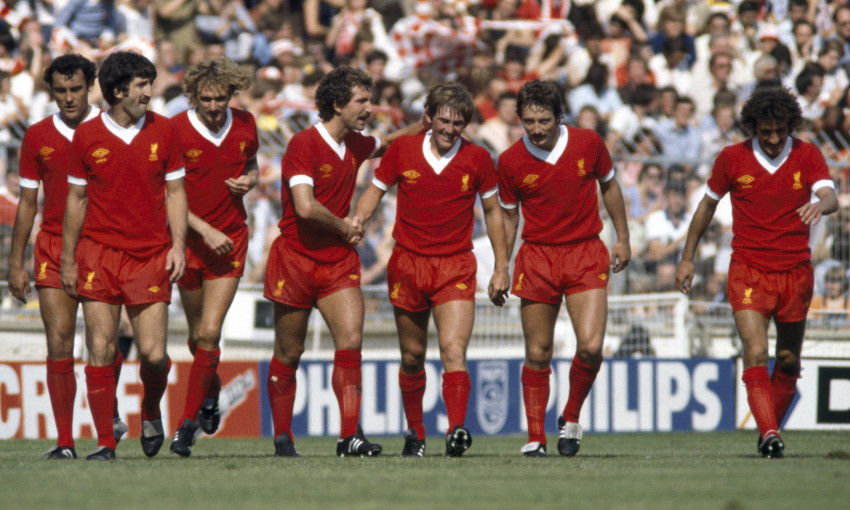 On the face of it, the match may appear to be a largely insignificant one. But Liverpool's 1-1 First Division draw away to newly-promoted Birmingham City on September 6, 1980 marked a unique point in the club's history.

Kenny Dalglish’s second-half opener was cancelled out by Frank Worthington to leave defending champions Liverpool fifth in the table after five games played of the 1980-81 campaign.

But that doesn’t tell the real history of the fixture. A record that stands even now, and will possibly remain forever, was set that day 40 years ago.

Liverpool’s starting XI for the match was named together for the 48th and final time in all competitions – the most any combination of 11 players in the club’s history has ever lined up collectively.

Ray Clemence in goal. A back four of Phil Neal, Alan Hansen, Phil Thompson and Alan Kennedy. Graeme Souness and Terry McDermott in central midfield, flanked by two wingers, Jimmy Case on the right and Ray Kennedy on the left. And to complete the set, a front two of Dalglish and David Johnson. 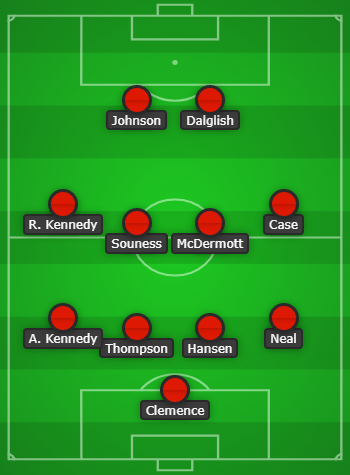 An iconic side led by manager Bob Paisley, that exact starting XI was named together in four competitions (the First Division, Charity Shield, League Cup and FA Cup) across three separate seasons from 1978-79 to 1980-81. The group won 37, drew seven and lost just four of their 48 games alongside one another, also keeping 29 clean sheets.

For some context to this, the most that current manager Jürgen Klopp has named a single starting line-up in his 266 matches in charge of Liverpool is five times.

Alisson, Trent Alexander-Arnold, Joe Gomez, Virgil van Dijk, Andy Robertson, Naby Keita, Georginio Wijnaldum, James Milner, Mohamed Salah, Roberto Firmino and Sadio Mane. This side started together in four of Liverpool’s first five league games of the 2018-19 season and then for a fifth and most recent time in a Champions League defeat at Napoli in October 2018.

This is because football has changed. In the Premier League era, the most any club has named any single starting XI is on 19 occasions (a Manchester United XI over a 364-day spell from 1992 to 1993), with Liverpool’s most in the competition being 11 times in the club’s 1,076 Premier League matches.

Any exact side lining up together 48 times is simply unfathomable nowadays. But that’s exactly what one of Paisley’s XIs did from 1979 to 1980.

Indeed, from April 7, 1979 to the draw with Birmingham in September 1980, Liverpool played 80 matches in all competitions, naming that same side for 48 of those games.

The first of the 48 was a 3-0 win over Arsenal, with goals from Case, Dalglish and McDermott. In fact, this side won each of the first 10 matches they played together, including the 1979 Charity Shield final, again against Arsenal. Bolton Wanderers were the first to at least stop this superb side from winning on the opening day of the 1979-80 league campaign, holding Liverpool to a 0-0 draw.

The Reds went on to win the league title for a second consecutive season that term, with the side in question being named for 24 of the 42 matches en route to what was the 12th of Liverpool’s 19 top-flight crowns. Indeed, across the 42 title-winning matches in 1979-80, Paisley made just 24 changes to his starting XIs.

By contrast, Klopp made 82 in leading Liverpool to the club’s latest championship last season. Football has become a squad game, and while Paisley was limited to a maximum of one substitution per league match during his tenure, Premier League sides were allowed as many as five each game at the tail end of last season. But consistency was key for Paisley’s charge.

The captain of the most-used team for each of their 48 games together was Thompson, who as of the game against Birmingham in September 1980 had played 362 times for Liverpool. Thompson was a veteran of the side despite only being 26 years of age. Of the other 10 players in the XI, only goalkeeper Clemence, at 32 years old, had played more times for the Reds at this stage (610).

On the morning of their final game together against Birmingham, the XI in question had made a combined 2,778 appearances for the Reds in all competitions.

The last time Liverpool deployed an XI with that many appearances to its name heading into a match was way back in February 1994 against Southampton in a Premier League clash, when Roy Evans selected a side that had experienced 2,833 previous games.

Cut to the current era for context, and Klopp has yet to field a side within a thousand Liverpool appearances of this. His most experienced line-up – named against Manchester City in July 2020, the game after the Reds had confirmed their latest league title – added up to 1,704 Liverpool outings, by comparison.

Perhaps most remarkable about the all-time most-used XI was the fact all 10 of the outfield players scored at least one goal in their 48 games alongside each other. Four of the side managed to bag 10 goals in the 48 outings, while forward pairing Dalglish (25) and Johnson (21) netted 46 of the 103 goals Liverpool scored in these fixtures.

Indeed, Johnson scored his only Reds hat-trick in one of these 48 matches, a 5-0 FA Cup third-round win over Grimsby Town in January 1980, in what was the 28th of the 48 times that starting XI was used.

At home, this great team was truly imperious. Of their 48 matches as an XI, 26 were at Anfield. They lost none of those fixtures, conceding just six goals in all. While their last match together overall was the aforementioned draw at Birmingham, their final Anfield outing was much more in keeping with the record of such a great side.

That was a 4-0 win over Bradford City in the second leg of a League Cup second-round meeting – overturning a 1-0 deficit from the first leg. Dalglish bagged a brace, with Ray Kennedy and Johnson completing the scoring. It was Liverpool’s first tie of that season’s competition and they would go on to win the trophy. All started by this brilliant side.

This team was built to succeed. An XI crafted during Liverpool’s most successful period under Paisley. Now, 40 years on, every one of the 11 players involved is a huge part of the history of Liverpool Football Club. Great players in a great team marking a great era for the Reds.