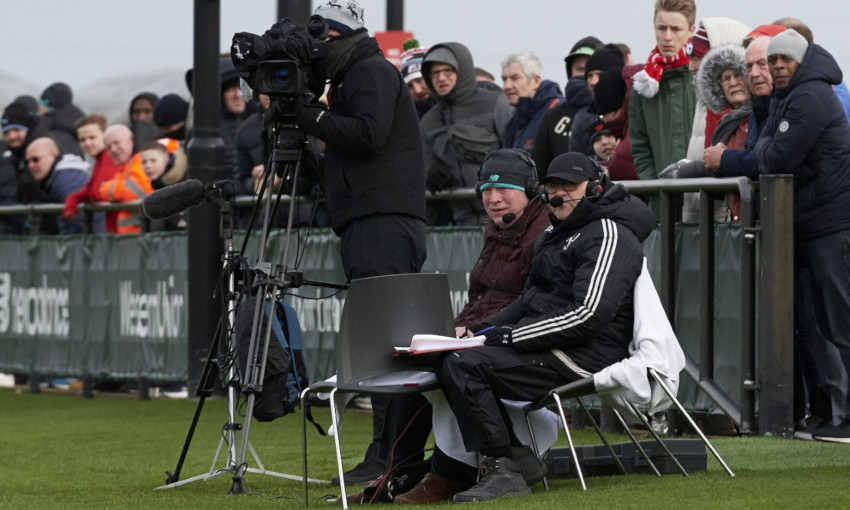 Having had a season ticket behind the great man’s dugout, when I was told Kop royalty was to accompany me in the commentary box I thought it was a wind-up at first. ‘Home’ at Anfield used to be the white TV gantry, which used to hang high up in the Main Stand. It was April 9, 2006, and we beat Bolton Wanderers 1-0. Rather appropriately, it was Robbie Fowler who scored the only goal; the King famously picked up the young, up-and-coming striker and took him to training when he was manager back in the day. Such a fantastic, humble man and an idol to us all. I only got the privilege of his company in the gantry for one game, but what an honour to commentate with your idol. It doesn’t get much better than that.

I was at Anfield as a season ticket holder when the great man netted his first goal in a red shirt with a thumping header beyond the reach of Peter Shilton, no TV cameras back then for highlights. When I covered Tranmere Rovers I got to know Aldo well when he became manager. Aldo is as passionate a Red as you could meet and his love for the club is truly special. The listeners love him and rightly so. He’s so funny as well when he gets angry with the referee.

I have been very fortunate to share the commentary box with Davie on numerous occasions throughout the years and we have travelled all over the country together. When we used to commentate on the Main Stand gantry, the old white box, it was brilliant because we were jumping around together like crazy when we scored.

Two of the funniest legends I know, and they always used to bring me a pie to the gantry with them for half-time! One of the funniest moments on the gantry was with Terry Mac. We were commentating on a Boxing Day game against Leicester City and in high winds his teamsheet blew off the gantry and was circling around like a paper plane! Terry has me in stitches. One particular game, his great friend David Johnson was feeling a bit under the weather and couldn’t attend. I did a shoutout for David and Terry quipped straight back with, ‘Yes folks, Davey is gutted he couldn’t be here today but don’t worry, he’ll be out later for a few scoops in his local!’ I lost it and couldn’t stop laughing!

I have also had the pleasure of sharing a commentary box with Bootroom legends Roy Evans and the late, great Ronnie Moran. Two absolute icons of the club but two of the most humble men you would ever meet. Ronnie was brilliant, he used to commentate like he was still on the bench shouting instructions, shouting ‘beat him’ to the wingers and ‘pass it’ when we were in a promising situation. Having a season ticket behind Ronnie, Sir Kenny and Roy – having those as my co-commentators is something I will never forget.

I want to give a big shoutout to Dom, who is going through a tough time but he had the most amazing news the other week, getting the all-clear, and I know he will back with us commentating in the near future. What a top fella he is. Dom is one of the funniest and kindest fellas you could ever wish to meet. All the club media team miss him but we know he will back in the not-too-distant future, ready to deliver his take on the fortunes of the Reds and the Academy.

I have known Mells since his days at the Academy when I commentated on him when our club highlights video service was in its infancy, and he once got 56 goals in one season. Getting the chance to co-commentate together on the Academy is brilliant. He is so passionate about seeing the lads do well, he enjoyed those unforgettable Kop-end moments against Arsenal and Olympiacos and he is desperate for the lads to try to replicate that.

Kirky is such a top fella and, like Mells, for him working for the club co-commentating on the games is the next best thing to playing. As good a fella as you could ever wish to meet, and a very funny sense of humour. It’s a privilege to share a commentary box with Kirky.

I had the privilege of co-commentating with Jan on the 2005 and 2007 Champions League semi-finals with Chelsea. What a player and what a person the Great Dane is too, an unbelievable knowledge about the game. When I commentate with Jan it’s like a footballing education.

The legend had some funny nicknames during his playing days, Dusty and The Vitch being a couple of them. Ronnie is also one of the funniest fellas I’ve had the privilege of sharing a commentary box with and his passion for the club is fantastic.

A fantastic double act these two legends who constantly take the mickey out of each other. In the early days of commentating for the club, Phil and AK were regulars with me in the commentary box and I loved every second of it with them. Passionate and funny, I used to be in stitches commentating with these European Cup heroes. Every time we had a corner at the Kop, Phil would jump up and shout ‘Goalllllllll’, desperate for someone to get their head on the ball and score! It was so funny.

I had the pleasure of Jason’s company during the US tour in 2019 when we did the games live together. Jason is a great lad, a very funny guy with a unique sense of humour and is very popular with everybody at LFCTV. I have done a fair few games with Jason over the years and always enjoy it. He does come out with some funny lines!

I have also had the amazing opportunity to work with other heroes I idolised on the pitch, like Steve McMahon, Mark Lawrenson, Gary Gillespie, Bruce Grobbelaar and the man who has made more appearances than anybody else, Ian Callaghan. I also have to mention Stephen Warnock and the great Hughie McAuley, who does the Academy games with me. Each and every one of them are brilliant, humble and I know it’s an old saying but it really is like living a dream.