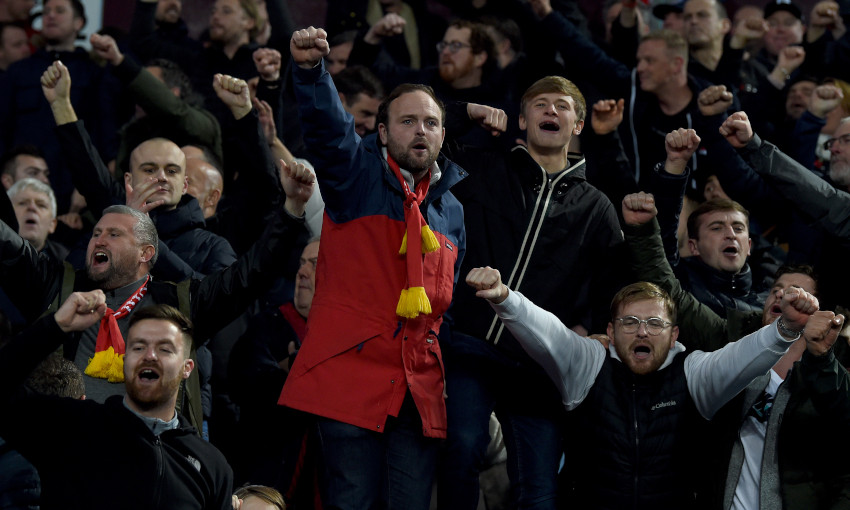 "The world stopped almost. Everyone froze, and then as soon as the ball hit the net it was just pandemonium everywhere.

“I was in row EE and I ended up in row CC or something like that. It was ridiculous, about four of us went right over the seats; you see families with kids and they’re all going for it, old fellas on the floor. Pandemonium is the only word to describe it.”

The seven minutes between 4.47pm and 4.54pm a fortnight ago today will assume a fond place in the memory of Liverpool fans.

Whether it was received by mobile phone, car stereo or TV, the news that the Reds had gone from trailing Aston Villa 1-0 in the 87th minute to winning 2-1 – thereby maintaining their lead of the Premier League and extending their 10-month unbeaten streak in the division – provoked an intense burst of emotion.

If that’s how it felt to process the drama at a distance, though, how did it feel to actually be there, at a wet and windswept Villa Park, as Jürgen Klopp’s side again proved their tag of ‘mentality monsters’?

And, more broadly, how has it felt to be a member of the travelling Kop during the last few seasons, at a time when crucial late goals seem to be flying in so regularly?

The description at the beginning of this article gives us some idea. Sam Evans has spent two-thirds of his young life following Liverpool and was there in the upper tier of the Doug Ellis Stand as the thrill of that November 2 match unfolded.

“It’s the best feeling in the world, I don’t think there’s anything better,” says the 18-year-old from Rainhill. “To be getting beat with five minutes to go, and you’ve got Villa fans winding you up, then to score in that fashion, it was unbelievable.

“Fulham [2-1 last March] was very good, Southampton [3-1 last April] is one that comes close, but this one, when Sadio Mane scored, and the fact it came in the corner [next to where the visiting fans were located], it was ridiculous.

“We ended up in a different spot and just stayed there, everybody was too busy singing the Mane song, and it wasn’t long until the referee blew for full-time.

“In terms of falls, I’ve had some big ones, obviously [Divock] Origi in the Champions League final, [Mohamed] Salah at Southampton – I didn’t think that would be beaten – but [Villa] was up there with anything I’ve ever been to.” 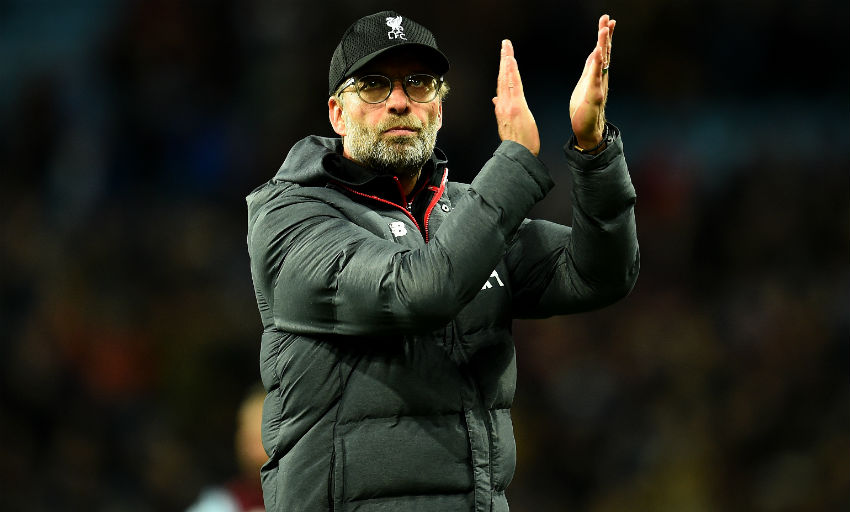 Kieran Molyneux, the singer and guitarist who has recently played in Denmark and the Republic of Ireland as part of BOSS Night’s travelling troupe, was also in the thick of it at Villa Park.

“There’s a video of me going round,” he laughs. “Someone’s filming from about four rows deep, and you just see me run back on myself and then run towards the corner flag, trying to get towards the players. I just couldn’t believe it.

“It seems to be worth more now, every single time we score a late winner it seems to get bigger. Everyone else is like, ‘This is getting beyond a joke now’, but we’re like, ‘Come on, let’s go.’”

From Salah at St Mary’s to Daniel Sturridge at Stamford Bridge, Ragnar Klavan at Turf Moor and, lest we forget, Mane at Goodison Park, last-gasp winners and equalisers have become so frequent that Liverpool supporters can no longer claim to be shocked by them.

But with their team heavily embroiled in title races this season and last, those heightened stakes dictate that the fans’ emotional reaction is just as intense every time.

“You talk about Manchester United in the late 1990s and early 2000s,” Kieran continues. “You didn’t know how they were managing it, it was like, ‘How are they doing this again?’ And looking at Liverpool now, it’s the other teams in the league asking that.

“Going back to the Mane one, or the Borussia Dortmund one with [Dejan] Lovren, they were surprise goals, but now it feels like we’re not panicking; I’m not panicking in the stand and the players don’t seem to be panicking on the pitch.

“We’ve had big late winners in the past, [Yossi] Benayoun under [Rafael] Benitez, [Dirk] Kuyt under [Kenny] Dalglish, but again they were all shocks, late goals out of nowhere when Liverpool were a bit more of an underdog. Whereas now we’re in control. This isn’t chance anymore, scoring late comes from Klopp’s attention to detail.”

The body language of Liverpool’s players – Andy Robertson sprinting back to the halfway line after scoring, Trent Alexander-Arnold dashing over to take that 94th-minute corner – has been cited as key in the wave of momentum the Reds built up on that afternoon in Birmingham, and Molyneux sees it as evidence that a subtle psychological shift has taken place.

“We definitely feed off that,” he states. “We as fans used to drive the team on, the Dortmund game for example, [Adam] Lallana at Norwich – those late winners that happened earlier in Klopp’s reign.

“Now, our players seem to have a better and more ambitious mentality than us fans. When we scored on 87 minutes, we were all still celebrating when the players kicked off again. I hadn’t seen that before.

“We were just like, ‘Wow, our record’s still intact, we’re still top of the league, big game next week.’ It all happened in milliseconds, but the players are a step ahead.

“The let-off now under Klopp, we’ve had big ones before but he’s given us some of our biggest late winners ever. You’d say the Origi one against Barcelona is even bigger than the [Steven] Gerrard one against Olympiakos. And Mane against Everton – is that bigger than the [Gary] McAllister one?”

Kieran and Sam both travel to away games on the Cambraco bus, a long-running service that does pick-ups in the south and the north of Liverpool before setting off for every corner of the Premier League map.

It’s a seven-hour round trip to Newcastle, eight hours to Watford, 10 hours to Norwich, Bournemouth and Southampton, with a whole lot of sights, sounds and smells to endure along the way.

“If you get beat and you’re seven hours away from home, it’s a long old journey, and you’re talking tactics,” Kieran reflects. “It all gets a bit miserable and grim, but when you’ve just scored a last-minute winner and you’re in a title race, it makes that seven-hour journey home a lot more special.”

Sam adds: “People say to you, ‘I couldn’t be bothered going to Bournemouth at half three on a Saturday morning’, but everything’s worthwhile when something like Villa happens, and a big part of it is because you’re with the same people, following the same routines.

“They’re all boss lads and everyone gets on well. What epitomised the whole experience [of Villa] was, we got a picture with about eight of us, the front end, Kieran and all them, and then someone was like, ‘Come on, get the back end in’, so the whole coach is in the picture. 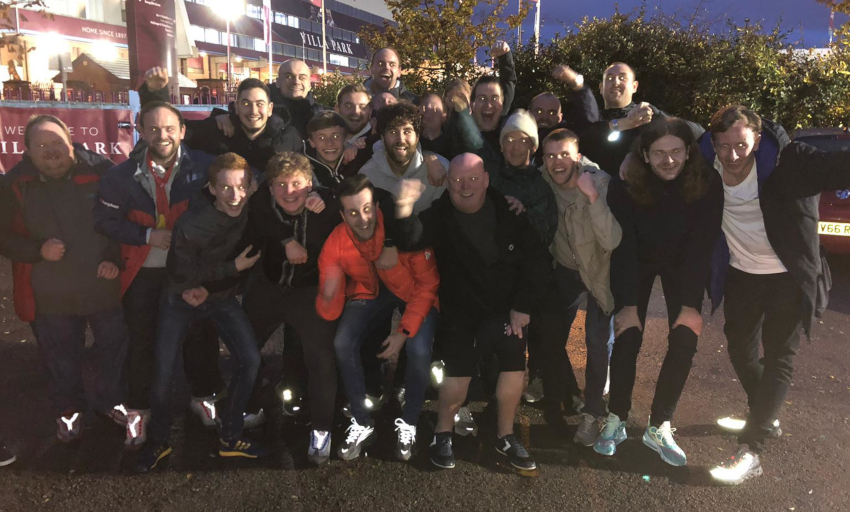 “That’s the best part of the day, for me; apart from the match itself, being on the coach is the best by far. When you’re with your mates that you go with every single week – home and away, Europe – being with them when a goal goes in and being on top of each other, there’s literally no better feeling.

“You look at them and they’re enjoying the moment, but it’s more than enjoyment, you can see it in their faces.”

The press on Villa 1-2 LFC: 'A team that does not know when it's beaten'

The view from Aston Villa: 'Grealish and McGinn will carry the fight'