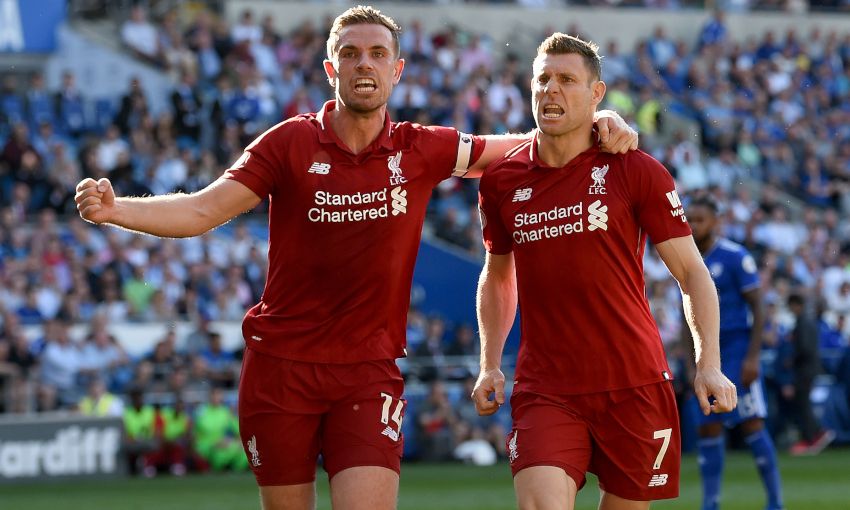 The view from Cardiff: 'We've become a tough side to beat'

Georginio Wijnaldum netted a brilliant goal and James Milner added a penalty as Liverpool went back on top of the Premier League with a 2-0 win over Cardiff City on Sunday.

Liverpool aren't going anywhere. They are taking this race right down to the wire. The defiant, booming roar emitted by the travelling Kop moments after the final whistle in South Wales was one of pride. Jürgen Klopp's relentless Red Machine had delivered the goods yet again. Here was another gutsy, priceless triumph for their bulging collection. A ninth straight win in all competitions propelled them back to the top of the Premier League table. Once again the gauntlet has been thrown down to Manchester City. The pressure is well and truly back on Pep Guardiola's men, who find themselves two points adrift with a game in hand. All eyes will be on Old Trafford come Wednesday night. Habits of a lifetime will be cast aside as Kopites throw their support behind the club's bitter rivals.

He doesn't get many these days, Wijnaldum. When he does, though, they tend to be pretty important. The Dutchman may not score a more critical goal than the one which broke open this tense contest at a sun-drenched Cardiff City Stadium on Sunday. At this stage of the season, anything will do. In this most remarkable of title races, the Reds are still very much alive and kicking. Now all eyes will fall on Manchester, and Wednesday's derby match at Old Trafford. Liverpool remain hopeful, but the games are running out. Manchester City sit second but retain – just – the advantage at the top of the Premier League. Beat Manchester United, and then Burnley on Sunday, and it is hard to imagine Pep Guardiola's side slipping up thereafter. The next week should be crucial. Liverpool, though, can only do what they can do. Their remaining three fixtures – Huddersfield, Newcastle and Wolves – are appealing, and after yet another clean sheet, and yet another victory over a side in the bottom half of the table, Klopp's men will be expecting to take nine points from nine.

Liverpool had to wait for the key moment to arrive here but this is now a team used to being patient, one which does not always have its own way from the beginning and has learned to trust itself by earning lots of victories the hard way. This was a belligerent team performance which delivered a result earned by the standard of the collective rather than any individual. Salah did not score but the level of his threat was as red as it has been in any of the fixtures since his spring break last month. Behind him, Jordan Henderson was also a brooding presence – his energy lifting the players around him when the mood became tense. It has been claimed that Liverpool's fixture at Newcastle is a dangerous one because of what comes before and after: Barcelona at the Nou Camp and then Barcelona at Anfield and whether fatigue will play a part in how this season is remembered. If it was present here after a midweek victory in Porto, it disobeyed its intuitions. From afar, Liverpool certainly look fitter and physically stronger than they did this time a year ago. With as many as six games to go, Klopp has the options to ensure there remains a voluptuous quality to his team's play.

The view from Cardiff: 'We've become a tough side to beat'

'Mo Salah the inspiration' - the media on LFC 4-1 Cardiff

View from Cardiff: 'I want us to go on the front-foot at Anfield'