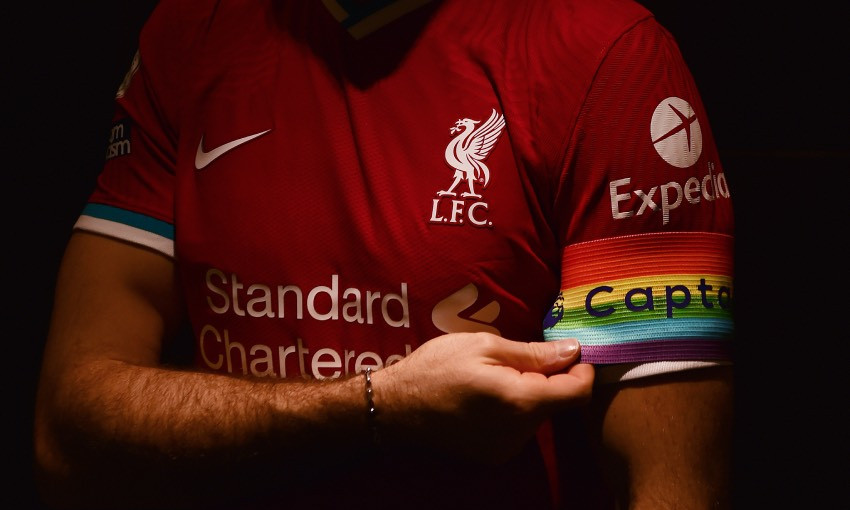 The new LGBT staff network, which forms part of the club’s Red Together inclusion strategy, was created to maintain a safe, inclusive and fair environment at the club where everyone can be their true authentic selves.

We caught up with Mark Armario, a senior manager at LFC and member of the LGBT staff network, to find out more about why its work is so important, its ambitions and upcoming activities, as well as the club’s wider equality, diversity and inclusion work as part of its Red Together strategy.

Mark, can you explain how the LGBT staff network first came about?

The creation of the group is part of the club’s Red Together strategy, which promotes and encourages diversity across the football club to make it as inclusive and welcoming as possible for everyone. One of Red Together’s commitments was to create several new colleague networks to allow people to connect across the club, create an internal community and enhance engagement with the wider community and supporter groups.

The network will be actively involved in a number of internal and external events celebrating the LGBT community, including Pride in Liverpool and other events delivered by LCR Pride Foundation, Rainbow Laces, Pride Month and LGBT History Month to build on the great work that the club has been doing.

I’m personally delighted and feel empowered to be a part of it and I’m looking forward to what we can achieve as a network of like-minded individuals.

What activities does the LGBT staff network have coming up?

Although we are a new group, we have already set up a programme of events for our staff. Firstly, we will be joined by Flight Lieutenant Caroline Paige, who made history as the first transgender officer to serve openly in the UK armed forces. This event with Caroline will complement other educational resources we have curated for our colleagues across the club to increase LFC’s staff understanding and awareness of the challenges that continue to be faced by the LGBT community.

We will also begin planning our support of Pride Month 2021 as well as our involvement in this year’s LCR Pride in Liverpool, which is always a highlight in the club’s calendar and one which we are proud to be a part of. There will be more details on this in the months to come. LFC will also have a presence at London Pride for the first time ever in the club’s history to demonstrate support for all our London-based colleagues, which is a really exciting addition to our calendar.

Other events that we will also be supporting and celebrating include IDAHOBIT in May, and Stonewall’s Rainbow Laces campaign and Trans Day of Remembrance later in the year.

Aside from a busy calendar of events, what is the next for the LGBT staff network and the club’s commitment to the LGBT community as part of its Red Together strategy?

In consultation with LFC’s LGBT supporters’ group, Kop Outs, we will be forming an LGBTQ+ independent advisory group to help us to continue to develop this area of work and inform what we do as an LGBT inclusive football club.

It’s fantastic that we already have members of the LGBTQ+ community who have agreed to be part of the group and provide their support, including Steve MacFarlane from the Michael Causer Foundation, Liverpool’s LGBT charity set up in Michael’s memory; Linda Riley of Diva Mag, Europe’s largest magazine for lesbian and bisexual women; and Flight Lieutenant Caroline Paige, who made history as the first transgender officer to serve openly in the UK armed forces. This is another exciting and important project for the club and more members will be announced soon.

For supporters who may not be aware of Red Together, it provides a recognisable platform for all the club’s work on and commitment to promoting equality, diversity and inclusion across everything it does.

Some recent highlights include:

For more information on Red Together, please visit https://www.liverpoolfc.com/redtogether.