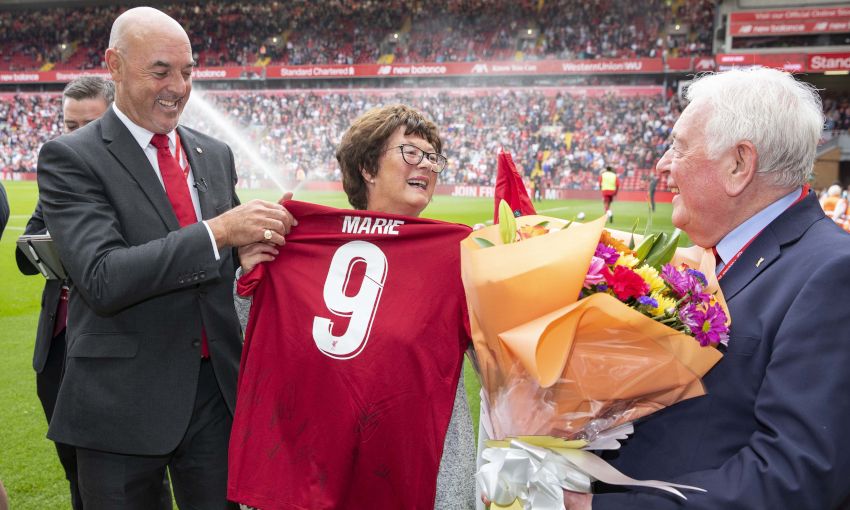 A lifelong Liverpool fan was honoured by the club for her commitment to the local Anfield community.

Marie Rooney, who was the manager at Anfield Sports and Community Centre for almost 40 years before her retirement in March 2019, was introduced to the Anfield crowd during Liverpool’s Premier League game against Newcastle United earlier this month.

The Reds season ticket holder was given a special welcome over the PA system before being invited pitchside to meet LFC legends Ian Callaghan and Bruce Grobbelaar, who presented her with a bouquet of flowers and a shirt signed by the current first-team squad.

“What a special day that I will never forget,” said Marie. “To have Liverpool players that I have adored over the years like Ian and Bruce calling me a legend, it was a truly heart-warming moment.

“And getting a standing ovation from the Kop – wow, would you believe it? I have always been passionate about my community and that won’t stop, even in retirement.”

Anfield Sports and Community Centre – which is the home of the club’s official charity, LFC Foundation – provides sporting, social and recreation opportunities for the local community, and Marie’s dedication over the past four decades has seen her help thousands of young people in the Anfield area.

Marie’s tribute was organised by The National Lottery as part of its ‘Big Surprise’ series, which recognises local community heroes, and the special moment will be broadcast on ITV this Saturday during the ad break of Britain’s Got Talent: The Champions.

Liverpool FC's impact off the pitch in the community