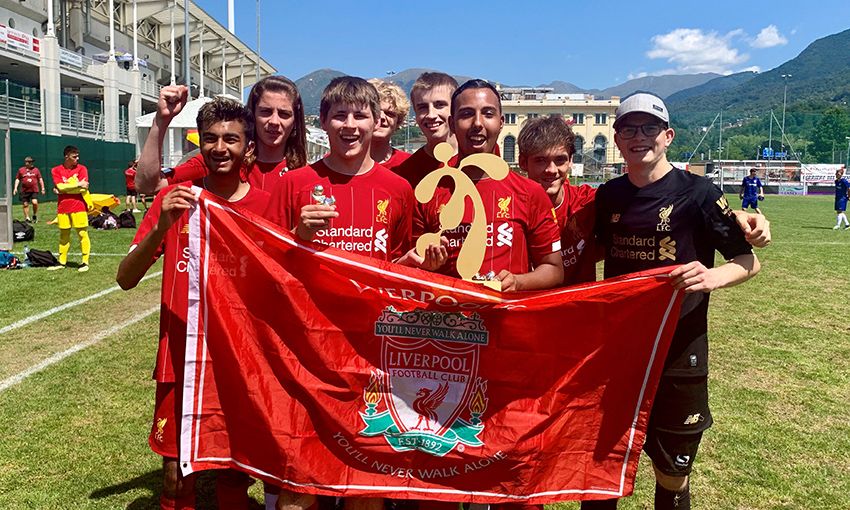 An LFC Foundation team has lifted Football is More's Inclusion European Cup after winning the inaugural competition in Switzerland this week.

The inclusion tournament welcomed over 120 young people representing clubs such as Paris Saint-Germain, AC Milan, Manchester City and Chelsea, with the Reds producing a confident 3-1 win over Benfica in the final.

Integrated into the 10th International Helvetia U16 Cup, which takes places annually in the Swiss city of Lugano, the competition gave the LFC Foundation youngsters the opportunity to enjoy some memorable experiences.

The team participated in the opening parade, played an inclusion game with young people from the local Ticino region and had the chance to impress scouts from top professional clubs.

The LFC Foundation side travelled to Switzerland alongside an LFC Academy squad, who competed in the simultaneous International Helvetia U16 Cup against the likes of Stade Rennais, Benfica and Stuttgart.

LFC Foundation inclusion lead, Terri Ritchie, said: “Having our inclusion team and the U16s playing at the same tournament has been amazing.

“Both sets of players got fully involved in celebrating each other’s successes, singing songs and cheering one another on from the side-lines - there was a real inclusive atmosphere throughout the weekend.

“It’s been brilliant to work with the Academy on this joint project and to see our two areas of the club come together from the planning stages onwards.

“Our youngsters were able to use the Academy facilities to train and prepare for the tournament, which was a fantastic experience in itself, and they have taken so much from spending time with the Academy lads whilst on the trip.

“It’s something they will never forget and we’re thrilled to have brought home the trophy, too.”