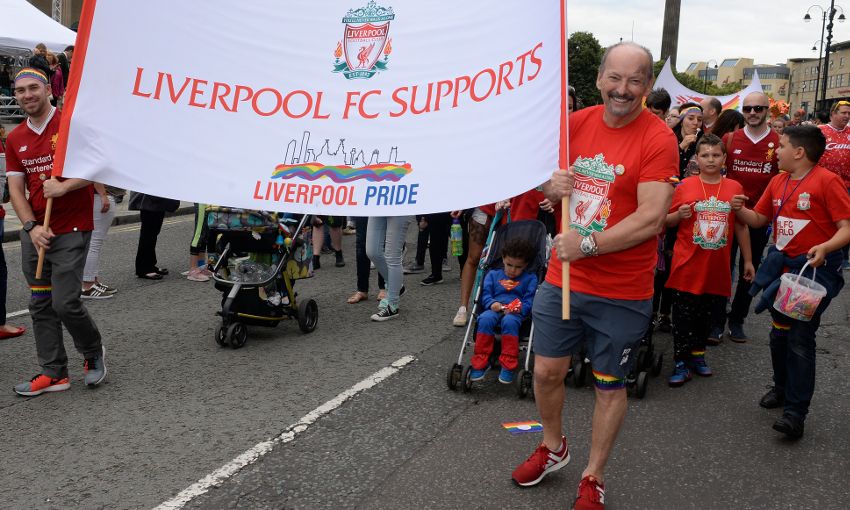 Liverpool FC will show its colours in support of this year's Liverpool Pride celebrations.

The Kop will be lit up in the colours of the rainbow, LFC retail stores will have Pride themed window displays, and representatives from the club will be taking part in the march through the city on Saturday July 28.

Former Liverpool Ladies FC and England International, Becky Easton, will be joining LFC on the march and greeting fans along the way.

Easton said: "As a member of the LGBT community, I was delighted when the club invited me to join them for the Pride celebrations; it's great to see the club supporting and raising awareness of inclusion and diversity both on and off the pitch."

The LFC contingent will also be joined on the march by the Liverpool FC LGBT+ Fan Group ‘KOP Outs’ who in a dazzling display of LGBT pride, will be accompanied by their very own homage to the LGBTQ+ community – an LFC inspired drag queen.

Paul Amann, Liverpool FC’s LGBT Rep, and chair of KOP Outs, said: "Pride is a massive event in the city, which we love taking part in each year.

"This year we wanted to do something different that showcases the 'KOP Outs' fan group and our love for LFC, so we decided to create our very own drag queen, Lily Liver, who will accompany us on the march."

The LFC inspired drag queen costume has been designed by students from Liverpool-based Rare School of Fashion, who have embraced the unique project and put their creative talents to the test; to come up with an extravagant costume, certain to make Lily Liver the showpiece of the Pride procession through the city.

James Lacey, course leader at the Rare School of Fashion, said: “We have loved developing this costume for Liverpool Pride, and working with KOP Outs to create the LFC inspired design; the students can’t wait to see it paraded around the city next week.”

For the next two weeks, Anfield’s famous Kop will be lit up each evening in the colours of the LGBTQ+ rainbow flag. This is part of Liverpool Pride’s 'Come Out of the Shadows' initiative, which will see prominent buildings across the Liverpool City region lit up each night using colours from the iconic flag.

Earlier in the month, the LFC Foundation hosted an LGBTQ+ Football tournament (July 7), at Anfield Sports and Community Centre, which saw five teams - The Brink, Mersey Marauders, Mersey Lisbon, Barclays, and She Drew the Gun - go head to head.

The Brink, a team from the well-known dry bar in Liverpool, won the tournament, claiming a 3-2 victory in a tense final against Mersey Marauders.

The theme for this year’s Liverpool Pride festival is #Alltogethernow, which is about every branch of the LGBTQ+ communities coming together whatever their ethnicity, gender, sexuality, belief or however they define themselves, in celebration of equality and diversity.

LFC was the first Premier League club to support a UK Pride march (six years ago) and first to receive the Premier League Equality Standard at Advanced level; and is extremely passionate about equality, diversity and inclusion, and committed to its promotion amongst fans, employees, players and the wider football family.

LFC has taken many positive steps to ensure that all forms of discrimination are eradicated both on and off the football pitch and works with a range of inclusion organisations throughout the year, including Kick it Out, Show Racism the Red Card, and Rainbow Laces.