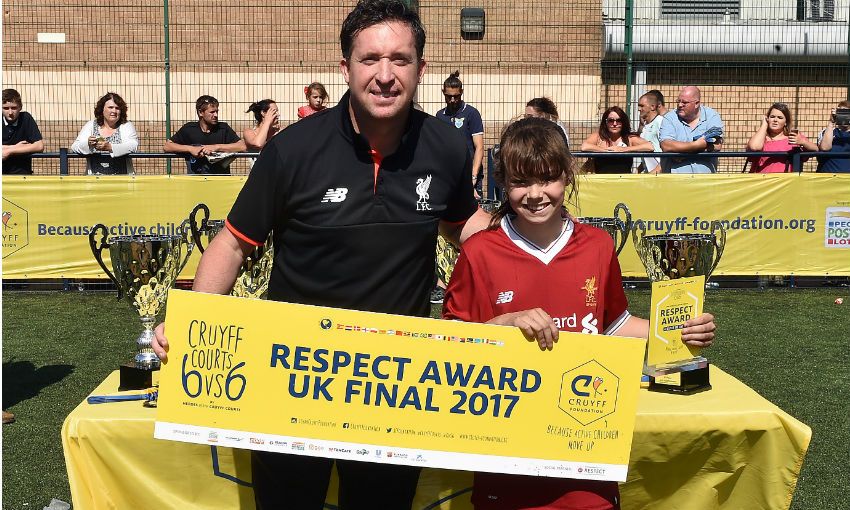 Liverpool FC this week joined a host of other clubs to celebrate the third UK Final of the Cruyff Court 6 vs 6 Championship Court at Anfield Sports and Community Centre.

Players from the club’s charity, LFC Foundation, represented the Reds in the tournament alongside teams from Tottenham Hotspur, Aberdeen, Arsenal and Everton.

Many of the tournament’s games took place on the Cruyff Court, which is located at the community centre where the LFC Foundation is based.

LFC Ambassador Robbie Fowler was on hand to present the winner’s trophies and medals to all of the participants. Liverpool were crowned champions of the 6 vs 6 girls’ tournament and Arsenal won the boys 6 vs 6 boys’ tournament.

Cruyff Courts are small, high-quality football pitches in the heart of the community, and are a project of the foundation of Dutch legend Johan Cruyff.

The tournament is organised by Heroes of the Cruyff Court, local young people who operate as role models for the community and is played in 10 countries around the globe with more than 25,000 children participating every year.

During the championship respect played a crucial role with each player involved signing the respect flag as well as taking part in workshops about the 14-rules of Johan Cruyff, which are about respect, playing together, taking responsibility and helping each other.

On attending the tournament, Reds icon Fowler said: "It was fantastic to see so many clubs from across the UK competing in the 6 vs 6 tournament at Anfield Sports and Community Centre.

"Johan Cruyff was an unbelievable footballer and one of my heroes growing up, so to see his memory honoured with so many community based pitches is absolutely brilliant."