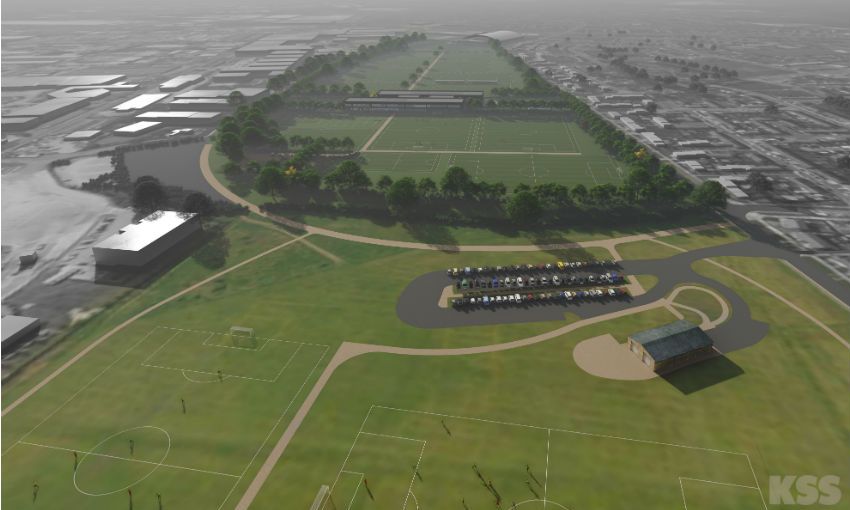 Liverpool FC and Knowsley Metropolitan Borough Council (KMBC) have announced joint plans for a proposed redevelopment of the Reds’ Academy site in Kirkby, including improvements for local residents and the community playing fields at Simonswood Lane.

A public consultation is being held next month for local residents and businesses to discuss the proposed plans in more detail.

LFC’s vision is to bring its first team and Academy football training operations and facilities together on one site. The £50m proposal includes the construction of a new combined training centre, the redevelopment of the existing facilities at the Academy and designs to convert the main pitch into an indoor pitch.

As part of the proposed masterplan, KMBC is leading on proposals to provide new and improved football pitches and sports facilities to the area, working closely with local football teams, including Kirkby AFC. The much-needed upgrade to the pitches will be able to support the highest level of amateur football matches with new changing facilities and car park.

The surrounding area will also see improvements which include new dog-walking and cycling paths, new lighting and improved security with a CCTV system. To enable the proposals to go ahead, LFC will need to purchase additional land immediately adjacent to the Academy site and close part of Moss Lane between Simonswood Lane and Arbour Lane.

The public consultation will be held on Wednesday March 8 at Northwood Community Centre (Gilescroft Avenue, Northwood, Kirkby, L33 9TW) from 2pm GMT until 8pm and will be open to local residents and the wider community. Residents will have the opportunity to view the proposed plans, speak with members of the project team and leave their feedback.

As part of the wider plans, LFC is also proposing a redevelopment of the club’s existing first-team training ground at Melwood. This proposed development could provide around 160 family homes in West Derby and newsletters have been posted to local residents to seek their feedback on the proposals.

Andy Hughes, chief operating officer at Liverpool FC, said: “Our proposed plans to bring the first team and young players together in one location is a really exciting proposition. The scheme includes state-of-the-art facilities which will be used to support the development of our players and provides all-weather training options.

“We are also working closely with Knowsley Council on plans to make substantial improvements for the local community. These include new and improved football pitches and sports facilities to support grass roots and amateur football teams, and developments to the surrounding areas for local residents.

“We recognise that Melwood has played a significant role in the club’s success and forms an important part of our history. However, the Melwood site is limited in space and is unable to accommodate our longer-term ambitions, which is why we are exploring options on the Academy site.

“We are encouraging our neighbours and local residents in Kirkby to attend to the public consultation to see the proposals first hand.”

Knowsley Council’s cabinet member for regeneration and economic development, Cllr Graham Morgan, added: “We have been working closely with Liverpool Football Club and the local community to develop these plans for the site on Simonswood Lane in Kirkby.

“As well as developing the LFC Academy site, the plans include proposals to provide new and improved football pitches and sports facilities for local teams and the community.

“I would encourage local residents and businesses to come along to the public consultation event to find out more and give their opinions. That feedback will then be used as part of the planning process in due course.”

Representatives from Liverpool FC and KMBC as well as experts in planning, construction and transport, will be available at the public consultation to answer questions.