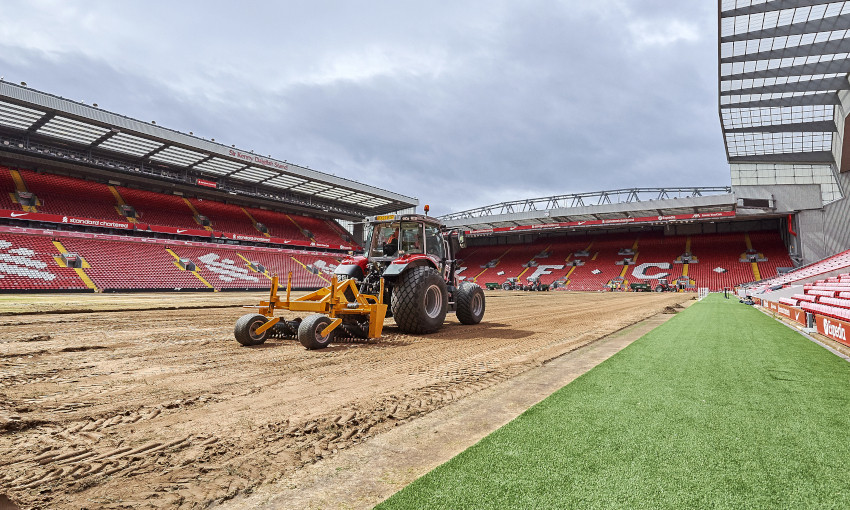 LFC supports city’s Pride celebrations with a host of activity

Ahead of the 2022-23 season, Liverpool FC is installing a new hybrid carpet pitch at Anfield.

The new hybrid pitch is a high-quality playing surface formed of a network of artificial fibres and open-structured backing – similar to a carpet – to offer reinforcement for the grass plant.

Its patented technology reinforces the natural grass by holding polyethylene fibres at the carpet base to a height of 45mm to be retained in the grass sward. It is then in-filled with sand, which is carefully selected to deliver optimal drainage and playing performance.

Composed of 95 per cent grass and five per cent artificial fibres, the carpet is laid over 10,000sqm and is filled with 40mm of sand across the surface. The surface is then seeded using specially selected cultivars, including four different types of perennial ryegrass – 25 per cent Monroe, 30 per cent Eurocordus, 25 per cent Guldara and 20 per cent Europitch. Each cultivar has different characteristics to perform better at different times of year.

From establishment to harvesting, the pitch has been tended to by LFC ground staff off-site. Once the carpet is fully established it is then harvested and transported to Anfield for installation.

To the naked eye, the pitch will not look any different to last season; however, the new hybrid pitch will provide excellent performance, stability and resilience, while significantly reducing the time period for end-of-season renovations to a pitch ready for competitive use. The average in-stadia pitch renovation window is seven to eight weeks growth from seed. By installing a hybrid carpet system, the club is reducing this window to three to four weeks, providing a bigger window of opportunity for close-season activity, including concerts, major events, play-on-pitch opportunities and pre-season friendlies.

In 2017, the Reds installed the UK’s first in-stadia ‘Permavoid’ drainage system, as well as a new undersoil heating system, installed to help aid growth and also prevent the ground from freezing during the winter months. The new hybrid pitch will be laid on top of the system, providing the ultimate playing surface.

The installation of the new turf has already begun with the removal of the old pitch, including 60mm of rootzone and the existing Desso fibres. LFC ground staff will then undertake preparatory field work ready for the laying of the hybrid carpet at the beginning of July, adding 15mm of fresh rootzone and cultivating the surface.

The pitch is expected to take only three days to be laid, allowing three weeks grow-in and establishment period ahead of the new season – one of the key benefits of the hybrid carpet system. Within days, roots will develop through the backing of the carpet and turf to form a reinforced natural playing surface.

Once laid, data tools will be used to regularly monitor pitch conditions to ensure the playing surface feels and reacts the same as the club’s training pitches at the AXA Training Centre, creating the perfect pitch for playing football.

LFC’s senior grounds manager, Warren Scott, said: “It’s a really exciting project – the installation of a hybrid carpet pitch will allow us to host pre-season fixtures as well as concerts at the stadium.

“Each year this gives us the ability to evaluate the playing surface and make any adjustments if needed after the close-season period to ensure the best possible playing surface.

“The fact that we can start to grow the turf in March at the turf farm will give us the assurance that we are in the best possible position to start the season with a strong, healthy pitch each year in a short timeframe.”